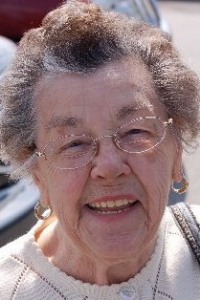 Mrs. Berthiaume was born in Worcester, daughter of the late Frederick and Agnes (Plante) Belanger and is also predeceased by her first husband, Eli L. Raymond who died in 1957 and her second husband, Francis W. Berthiaume who died in 1983. Ernestine was born on April 15, 1912, the day the Titanic sank.

Ernestine is survived by a son, Stephen L. Raymond and his wife Joan of Barre; a granddaughter, Shannon Raymond of NH; a great grandson, Zachary Raymond and his wife, Jess of Leicester; a great great great grandson, Jameson Raymond; 2 step grandchildren, Christopher Czechowski of Texas and Jessica Czechowski of Barre and a brother, George Belanger of Worcester.

Ernestine was predeceased by 3 brothers, Frederick, Armand and John; 3 sisters, Florence. Agnes and Rose and a step son, Robert Berthiaume.

She leaves many loving nieces and nephews and extended family members.

Ernestine was a very loving and caring woman with a positive outlook and a kind word for everyone. She has made many friends throughout her long life and always had a sweet demeanor. Everyone who knew her feels blessed to have been part of her life. She will be missed dearly.