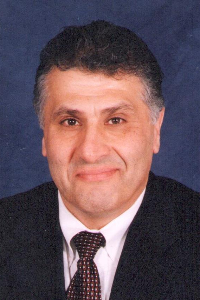 
He leaves his wife of 43 years, Valerie A. (Mosessian) Babaian; a son, Peter M. and his wife, Sarah E. Babaian of Wilmette, IL; a daughter, Alexis C. Babaian of Jefferson; two grandchildren, Katherine R. and James R. Babaian; his mother, Rose (Chakerian) Babaian of Braintree; two sisters, Marsha and her husband, Hagop Alabachian of Braintree and Nancy and her husband, Carlos Taraktzian of Cranston, RI, a sister-in-law, Jean Mosessian and several aunts, cousins, nieces, and nephews. His daughter, Lauren A. Babaian predeceased him in 1985. He was born in South Weymouth, son of the late Hutchadew Babaian and graduated from Whitman Hanson High School and Northeastern University, and received his Master’s degree from Suffolk University.


Peter was the owner of Martin and Lauren Realty Company, a property management company in Worcester. Prior to that he held several different occupations. He was a licensed tax preparer and a store manager for several large grocery chains in the New England and New York area, including, Price Rite, Shaw's, Iandoli's, and Finast Supermarkets. He also taught evening classes at Becker Junior College. Early in his career he was the vice president for the former family business, Babaian's Market with locations in Whitman and Middleborough. He was a member of the Boston Grocers Assoc., the Worcester Property Owners Assoc., past commander of the Knights of Vartan and past President of the Men’s Club both at the Armenian Church of Our Saviour, and a past King Lion of the Holden Lions Club.


Peter had a lively personality and an infectious sense of humor. Always ready with a firm handshake, he was fast to make friends and always generous with his time. He was a history buff who loved to read, travel with family and play golf badly. A former Eagle Scout, he was formerly active in the Holden Boy Scout Troop 180 and held a single engine pilots license. His true love was spending his time with family and grandchildren on Martha's Vineyard.


Visiting Hours are Wednesday, December 7 from 4 to 8 PM in CALLAHAN~FAY~CASWELL Funeral Home, 61 Myrtle St., Worcester. A Funeral Service will be held Thursday, December 8 at 10am in the Armenian Church of the Holy Translators, 38 Franklin St., Framingham. Please go directly to the church. Burial will follow in Blue Hill Cemetery, Braintree. In lieu of flowers, memorial donations may be made to the church.