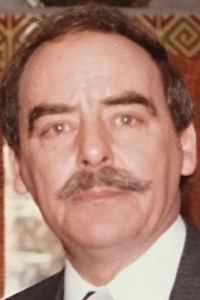 
Bradford C. Beatty, 90, of Worcester, died December 1st in Beaumont at University Campus. He is survived by his son, Roger Seth and his wife, Deborah of Shrewsbury; five daughters, Christina E. Benoit of Holden, Susan J. Hutchings of Worcester, Linda L. Carota and her husband, Michael of Auburn, Anji Seth Stolze and her husband, Christopher of Tolland, CT and Jennifer L. McKenzie and her husband, Jeffrey of Montreal; three brothers, Donald Beatty of Northborough, George Beatty of Worcester and Lester Beatty of North Adams; two sister, Beverly Sholl of Coventry, CT and Marilyn Constantino of Manassas, VA; twelve grandchildren and seven great-grandchildren. Two brothers, Milton and Alan Beatty, and two sisters, Shirley Bouley and Elizabeth Fournier predeceased him.
He was born in Worcester, the son of Lester and Ellen (Anderson) Beatty; and was a graduate of Worcester Boys Trade. He was a World War II Navy veteran serving in the Pacific Theatre. Brad had owned and operated Speedway Auto Body for many years. He was a member of the former Bethany Christian United Parish, in 2003 and in 2006 he was awarded the Massachusetts Republican of the Year, presented by the National Republican Committee. Mr. Beatty was a 31st Degree Mason, Scottish Rite lifelong member of Masonic District 24. He had served as past president of the Webster Square Business Association and the Central Massachusetts Auto Rebuilders Association and a member of the Massachusetts Auto Damage Appraisal Licensing Board. Brad was an avid hunter and enjoyed being outdoors.
His funeral with military honors is Tuesday, December 6th at Noon in O'CONNOR BROTHERS FUNERAL HOME, 592 Park Avenue. A visitation will be held from 11:00 a.m. until the time of the funeral.