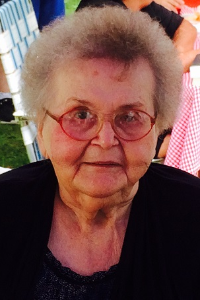 Phyllis Carolyn (Harts) Carlson, formerly of Auburn, died peacefully on Sunday, November 27, 2016, at the Lutheran Home of Worcester after a period of declining health. She was 91. She is predeceased by her husband, Robert C. Carlson of Auburn, MA.

Born on January 14, 1925 in Worcester, MA, Phyllis was the daughter of the late Walfrid and Signe (Erickson) Harts of Worcester. She is a graduate of both Commerce High School and Worcester City Hospital. She worked as a Registered Nurse, at the Amherst College infirmary, the Fairlawn Hospital, and the Wayside Nursing Home of Worcester while raising her family. She spent the bulk of her working years as a Head Nurse at the Worcester State Hospital on a geriatric ward, from which she retired in 1983.

Phyllis is survived by her three children: Robert Carlson Jr and his wife Judith of Cincinnati, Ohio; Ronald Carlson of Spencer, MA; and Susan Carlson of Worcester and her husband Lee Leonard. She leaves her grandchildren, Andrea (Carlson) Magan, of Rosemount, Minnesota, Margaret Eells and Katherine Keaney of Worcester, and William Carlson Eells of Los Angeles, CA and two great grandchildren, Grace Andrews and Robert Magan of Minnesota. She also leaves her beloved sister Marilyn Harts Quigley of Rochester Hills, Michigan, her sister-in-law Mae Carlson Swenson of Worcester, and much loved nieces and nephews, in addition to her best friend of many years, Janice Hill of Spencer, MA.

As a child of the Great Depression, Phyllis appreciated the value of a dollar and the virtue of hard work. She talked proudly of how she got her first job in her teens as a cashier at JJ Newberry’s. As the years went on she and her husband Robert passed that work ethic on to their children by deed and by word. With her ability to stretch a dollar, she always ensured her family got a healthy meal, dessert included, most all homemade. She enjoyed vacationing with her family, whether in Maine, Florida, Seattle, Las Vegas, or even in France where she got to visit her daughter who was studying in Paris. Mostly, though, Phyllis enjoyed doing handwork of all kinds. In the 1950’s, she taught herself how to paint and learned how to hook rugs, dying the wool by hand and hooking it into gorgeous carpets, which even won her a blue ribbon at the Eastern States Exposition. She sewed, knitted and later in life, learned cross-stitch and needlepoint. Her home was decorated with her beautiful handwork, and her family and friends consider these pieces to be family heirlooms.

Calling hours will be held Thursday, Dec. 1, from 5-7pm at Nordgren Memorial Chapel, 300 Lincoln St., Worcester. Funeral services will be held Friday, Dec. 2, at 11:00am at Trinity Lutheran Church, Christ Chapel, 73 Lancaster St., Worcester. Burial will follow at All Faiths Cemetery. In lieu of flowers, contributions may be made to the Trinity Lutheran Church Endowment Fund.