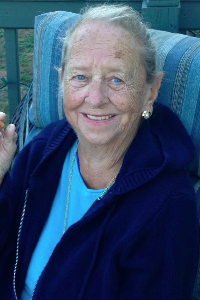 Worcester - Grace Ann (Keating) MacLean, beloved Mom, Grandma/Grammy and Auntie, passed away on Sunday, November 6, at the age of 85 after valiantly battling lung cancer and Alzheimer's.
Grace was born on May 14th, 1931 in Worcester, where she lived her entire life.  She attended Commerce High School and her life long dream was to become a professional Ice Dancer.   At the age of 24 she married Stewart E. MacLean who passed away many years ago.  She worked for most of her adult life in retail at Grant's Department Store, Zayre's and Ames in Worcester.  She was a parishioner of All Saint's Episcopal of Worcester.
Grace was an adventurous woman, strong and vibrant, with a hearty laugh and a very dry sense of humor.  Her passions were Elvis, Bingo and shopping.  She loved Atlantic City and Foxwoods, and despite never getting a driver's license, she never ever sat still and even played bingo in Las Vegas.
Grace was preceded in death by her mother, Alice Moors Keating Dulmaine, who immigrated to Worcester from Yorkshire, England in 1918; her son Mark Robert MacLean; her sister Shirley (Keating) Buchyn.  She is survived by her daughter, Lynn (MacLean) Kurunerie, her son Scott MacLean, several nephews and nieces, including Tami (buchyn) Mohamed, Charlene (Buchyn) Thompson, Alice (Buchyn) Stone, her grandchildren Gil Kurunerie, Kyle MacLean, and Samantha MacLean.  She was also blessed with three adoring great grandsons, Aiden, Alex and Cooper who were the absolute light of her eye.  She spent the last several months of her life at home with her daughter in law, Kimberly Rockwood, who cared for her until her passing.  In lieu of flowers, please make a donation to Hospice of Franklin County or Life Path Options for Independence in her namesake.  There will be a celebration of her life at the home of Ms. Rockwood and all are welcome on December 4, from 4 to 8 PM.
Alfred Roy & Sons Funeral Home 12 Hammond St. Worcester is assisting with arrangements. To share a memory of Grace or to sign the online guestbook, please visit www.Royfuneral.com