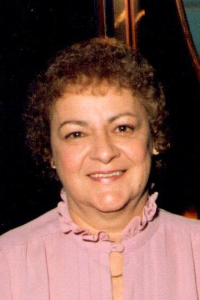 WORCESTER-Alice J. (Montambeault) McMahon, 83, formerly of North Oxford, died Saturday, November 5, 2016 at Rose Monahan Hospice Home. She was predeceased by her beloved husband of 50 years, James J. McMahon in 2003 and her son, John S. McMahon in 1993.

Born in St. Samuel, Canada on September 20, 1933, she was the daughter of Arthur and Aldina (Talbot) Montambeault. After the death of her parents, she was brought to Lewiston Maine and raised at St. Joseph’s Orphanage (formerly the Marcotte Home). When Alice and James married they started their family and lived in Quinsigamond Village for many years. She was a loving and devoted mother, grandmother and great grandmother. Alice loved to cook, especially traditional French food, and she shared that passion with her family on holidays and her Sunday dinners. She also cooked in several church rectories for many years and she volunteered as a school crossing guard.

Alice’s funeral will be held on Tuesday, November 8th from CALLAHAN FAY & CASWELL Funeral Home, 61 Myrtle Street with a Mass at 11:00 am at St. John’s Church, 40 Temple Street. Entombment in St. John’s Mausoleum will follow. Visiting hours are Monday, November 7th from 4-7 pm in the funeral home.

In lieu of flowers, donations may be made to VNA Hospice Care, Rose Monahan Hospice Home, 10 Judith Road, Worcester, MA 01602.