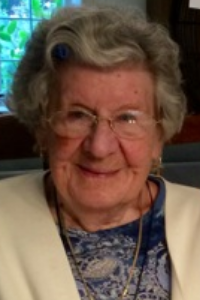 HYANNIS; Irene A. (Larocque) Grandmont, 96, of Hyannis, previously a longtime resident of Spencer, passed away peacefully on Tuesday, October 25 at Essex Pavilion Nursing Home in Barnstable.
She was born on October 1, 1920, a daughter of the late Israel and Clara (Codere) Larocque. Irene was a caring wife, mother, sister, aunt, grandmother, and great-grandmother. Her kind heart and generous spirit afforded her the opportunity to develop many friendships in Spencer and at the assisted living facilities that she resided in for the past three years. Her nurturing character will live on through her children, grandchildren, and great-grandchildren.
In addition to her parents, Irene is pre-deceased by her beloved husband, Armand in 2004, and her special daughter, Jeanne. She is survived be her son Richard Grandmont and his wife Maureen of Hyannis, and son Donald Grandmont and his wife, Arlene of Morgantown, WV. She was lovingly called Memere by her three grandchildren and five great grandchildren. She also leaves behind many nieces and nephews who called her "ma tante".
Irene's family would like to thank the caregivers from Brookdale Senior Living and Beacon Hospice for the compassionate love and care giver to her.
A Funeral Mass will be held Saturday, October 29 from the J. HENRI MORIN & SON FUNERAL HOME, 23 Maple Terr. Spencer, with a Mass at 10 A.M. in Our Lady of the Rosary Church, 7 Church St., Spencer. Burial will follow in Worcester County Memorial Park, Paxton. A calling hour will precede the Mass from 8:30 to 9:30 A.M. in the funeral home. In lieu of flowers, donations can be made in Irene's memory to Mary, Queen of the Rosary Parish, 60 Maple St., Spencer, MA 01562.