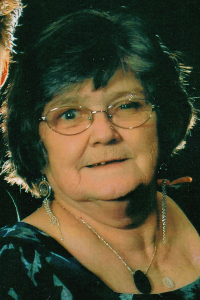 She was born and raised in Dusseldorf, Germany, the daughter of Hjalmer and Margarete (Thur) Lauritzen. She lived in Washington State, Kentucky and North Dakota before settling in Thompson, CT in 1971. She became an American citizen in 1959.

Mrs. Hazzard held several positions in her life. She was a clerk in the cosmetics department at Rose’s Department Store in Elizabethtown, KY. She was also a clerk in the Army PX stores at different bases. She owned and operated her own diner in Forman, North Dakota. She ran all operations at the former Perkins Press in Webster, MA. “Doris” was a waitress and later hostess at the Colonial Club Restaurant in Webster for 38 years, retiring in 2012.

She was a member of the Thompson Congregational Church. She had many interests including cooking, chocolate, flower gardening, and attending musicals. She enjoyed the online computer game POGO, was an ardent fan of the Boston Red Sox and looked forward to her visits to Mohegan Sun. Her special joy was her family, her grandchildren and great-grandchildren, and Christmas Eve at home with her loved ones.