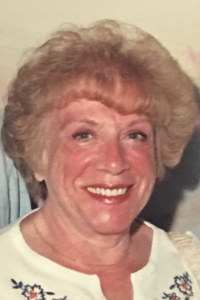 Bernadette "Bernie" Reilley, 80, of Cherry Valley, died Tuesday, October 25th in Holy Trinity Nursing and Rehabilitation Center with her family by her side. Her husband, Nicholas "Nick" Petralias died this past August. She is survived by three sons, Steven W. Reilley of Plymouth, Christopher C. Reilley and his wife, Susan of Dedham and Joseph B. Reilley of Worcester; a step-son Gary Petralias and his wife, Vickie of Natick; her brother, Joseph E. Butler and his wife, Barbara of Somers, CT; four grandchildren, Amanda, Veronica, Erica and Katherine and several nephews and nieces.
She was born in Worcester, the daughter of Edward and Albina (Emco) Butler. Bernie had worked as a social worker for DSS and later the Office for Children for over 30 years, retiring in 2002. She was a member of St. Spyridon Greek Orthodox Cathedral and had served as Regional President of the Daughters of Penelope; she was also a member of the Ladies Philoptochos, the Leicester Lions Club and had served on the Board of Directors of Holy Trinity Nursing and Rehabilitation Center.
A memorial service will be held on Saturday, October 29th at 2:00 p.m. in O'CONNOR BROTHERS FUNERAL HOME, 592 Park Avenue. Calling hours will be held from Noon until the time of the service on Saturday, in the funeral home.
In lieu of flowers, memorial donations may be made in her name to Holy Trinity Nursing and Rehabilitation Center, 300 Barber Avenue, Worcester, MA 01606.