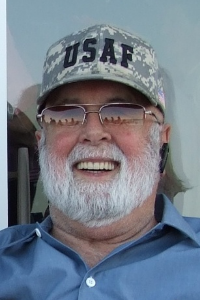 He leaves two children, Elaine L. Chartier and her husband, Chris of Rochdale and Barry C. Girard of Worcester; two granddaughters, Rachel and Erica O’Rourke; a great-granddaughter - the apple of his eye - Olivia Jyringi; his longtime friend and companion, Barbara Balmforth; a sister, Germaine Chamberland of North Smithfield, RI; many beloved nephews and nieces, and some of the best friends anyone could have asked for in Las Cruces, NM.

He was born in Woonsocket, RI son of Reno and Lillian (Leduc) Girard. Entering the U.S. Air Force at age 18 Jerry spent the next 22 years traveling the world before settling back in Worcester. After spending some more years in Rhode Island Jerry retired to Las Cruces, New Mexico for 21 years and eventually returned to Massachusetts. He was an Air Force Veteran of the Vietnam War.

Jerry was a manager at the US Postal Service, before retiring. He had a tremendous zest for life and was always the life of the party. A self proclaimed computer buff Jerry prided himself on keeping up with and mastering everything new that technology had to offer.

Visiting Hours will be held Saturday, November 5 from 11am to 1pm with a Prayer Service at 12:45pm in CALLAHAN~FAY~CASWELL Funeral Home, 61 Myrtle Street, Worcester. Burial will be private. Please omit flowers, donations may be made instead to the VNA Care 120 Thomas St., Worcester, MA 01608 for use at Rose Monahan Hospice Home.