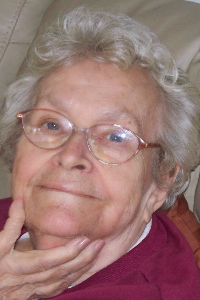 Barbara A. (Sottak) Backstrom, 95, of Worcester, passed away Sunday, October 9th in Beaumont Nursing Center. Her husband, James A. Backstrom, Sr., died in 2003. She leaves two sons, James A. Backstrom, Jr. and his wife Deborah of Leicester and Peter N. Backstrom and his wife Linda of Worcester; a daughter, Diane L. Capen of Worcester; eight grandchildren; 9 great grandchildren; nephews and nieces. She was predeceased by her siblings, Sherman Sottak, Donald Sottak, Paul Sottak, Julius Sottak, Katherine Lever, and Beverly Johnson.
She was born in Palmer, the daughter of Paul and Viola (Niles) Sottak and graduated from Leicester High School. Mrs. Backstrom was a sales clerk for the former Denholm & McKay and Barnard's Department Stores. She was a longtime member of the former Cherry Valley United Methodist Church, where she was the Superintendent of Sunday School and later joined the former Aldersgate United Methodist Church and its Women's Society, as well as the Worcester Horticultural Society, and the North American Lily Society.
Friends and family may visit on Monday, October 17th from Noon until 1:00 P.M. in O'CONNOR BROTHERS FUNERAL HOME, 592 Park Avenue. Her funeral service will follow at 1:00 P.M. in the funeral home. Burial will be in Cherry Valley Cemetery in Cherry Valley. Donations in her memory may be made to Abby's House, 52 High Street, Worcester, MA 01609 or St. John's Food for the Poor, 44 Temple Street, Worcester, MA 01604.