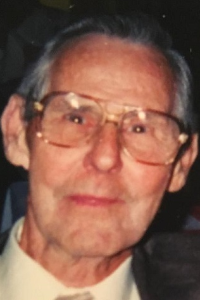 John Ward, 89, of Leicester, died Wednesday, October 5th, in the Meadows of Leicester. His wife of 65 years, Shirley A. (Harrington) Ward died in 2011. He is survived by three sons; Ronald J. Ward of Tuscon, AZ, Dennis C, Ward and his wife, Karen of Wrentham and John S. Ward and his wife, Carolyn of Leicester; seven grandchildren, including Tracee Campo, Tara Webber, Scott and Jay Ward; seventeen great-grandchildren and nine great-great-grandchildren and several nephews and nieces. He also leaves his longtime best friend and companion Marlene Fish of Leicester. A brother, Arthur Ward and a sister Mary Posson predeceased him.
He was born in Leicester, the son of Walter and Lillian (Gamble) Ward. Mr. Ward was a World War II Army Veteran, serving in the Philippines as an artilleryman and radio repair specialist. He had been a machinist for several area companies, including Rex Chain Belt and Harrington and Richardson before retiring. John was a member and Past Commander for the Longwood Post 8207 in Florida, and a member of the American Legion. He enjoyed fishing, and following all the New England sports teams.
A Celebration of Life will be held on Saturday, October 29th at the Hillcrest Country Club from 4:00 until 8:00 p.m. O'CONNOR BROTHERS FUNERAL HOME, 592 Park Avenue is assisting the family with arrangements.