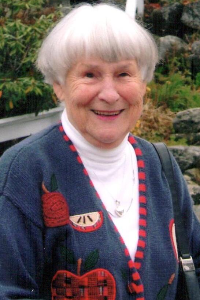 Shrewsbury-Gloria A. (Dufault) Binns, 90, of Shrewsbury passed away in UMASS Medical Center.

Her husband, Harold F. Binns died in 1999. She leaves a son, Mark F. Binns of Shrewsbury; two grandsons, Derek and Todd; a sister, Joan Lamothe and her husband, Wayne of Charlton; a brother, Paul Hidenfelter and his wife, Sandra of Cherry Valley; a daughter-in-law, Celia Binns and nieces and nephews. She was born in Worcester, daughter of Theodore and Florence (Boisclaire) Dufault and graduated from Worcester Schools.

Gloria worked for 19 years at Spags in Shrewsbury, prior to that she worked for AT&T Phone Company. She was an active member and enjoyed volunteering at St. Anne's Church. Gloria loved going out to dinner with the girls and knitting for her family.

A Visiting Hour will be held Saturday, October 8 from 9:30 to 10:30am in FAY BROTHERS Funeral Home, 1 West Boylston St., West Boylston followed by a Funeral Mass at 11:00am in St. Anne's Church, 130 Boston Turnpike, Shrewsbury. Burial will be in Mountain View Cemetery. In lieu of flowers, memorial donations may be made to St. Anne's Church.