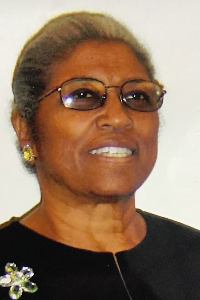 Dr. Ogretta Ann Humphries Vaughn McNeil was born on September 2, 1932 in Savannah, Georgia to Claude and Fannie Humphries. Ogretta was the younger of two children - her brother was James Humphries. A handful of years later, her family moved to Washington, DC where she was a member of Matthews Memorial Baptist Church and eventually graduated from Dunbar High School (with honors) and Howard University (Phi Beta Kappa). In 1954 she attended graduate school at Howard University. It was during this period that she worked as a research assistant at the National Institutes of Health in Bethesda, MD and in 1956 entered Clark University to complete her master's degree and pursue a doctorate in psychology. In 1960 she took time off to marry John Vaughn, whom she met when he was in the doctoral program at Boston University in physics. They both then left school and moved to Poughkeepsie, NY where John accepted a senior executive position with IBM and they proceeded to have two sons, John Jr. and Robert. After the sudden death of her husband in 1964, she returned to Clark and completed her degree. A fellowship from the Danforth Foundation made it possible. A number of years later, she married Kingsley R. McNeil, a local entertainer and budding small businessman.

Her first full time position was as a counselor at Worcester Youth Guidance Center but shifted to teaching two years after receiving her Ph.D. at Clark. Her teaching assignments were at Assumption College and Anna Maria College before she joined the faculty at Holy Cross College where she spent 27 years. As faculty member and administrator she spearheaded a number of important initiatives. Ogretta was an organizing member of the African American concentration and Phi Beta Kappa, as well as a confidante to African American, Latino, and Asian students. She was a Founding member of the Jesuit Conference on Minority Affairs and served as President of the New England Psychological Association.

In addition to her work on campus, she dedicated herself to the greater Worcester community. Her concern for individuals and community members is reflected in the countless hours she gave to a variety of local organizations. She served for 10 years on the Worcester School Committee; two of those as Vice Chair. Board positions also included: The Ecotarium, The University of Massachusetts Medical Center Foundation; Trustee at LeMoyne College; and Trustee at the University of Massachusetts. Ogretta was also a Counselor at the American Antiquarian Society. Through her work on the Massachusetts Association of School Committees and Chair and Co-founder of the Urban Division, she advocated for initiatives to enhance the quality of education for all students. Ogretta retired from Holy Cross in 1997 but continued to be involved with a number of academic and civic projects.

Ogretta McNeil has received numerous awards for her service. At her core, she was a passionate mentor and friend to many, deeply committed to high standards for academic achievement, gracious and welcoming to people across many divides including race and class, a tireless advocate for quality education for all, and outspoken in all parts of her life in a manner consistent with the Biblical prophets who were willing to speak truth to power because it was the “right thing to do.” She was also a caring mother who nurtured a spirit of independence within her sons, a supportive spouse who did the hard work of being married every day, highly organized which contributed to her effectiveness, a dedicated friend who showed up for others with little-to-no fanfare, and generous with her time and resources. Ogretta also had a powerful presence, an infectious laugh and a mischievous sense of humor.
As she returns to heaven to be with God and those who preceded her, she leaves behind, two sons, John and Robert Vaughn; two daughters-in-law, Kim (Jordan) Vaughn and Linda Vaughn; four grandsons, Nico, James, Caleb and Aidan; a sister-in-law Agnes Houseal; two nieces, Pat Lee and Seletheia Kenon; and nephew Jimmy Houseal. In addition, she has cousins, extensive extended family and friends who will miss her dearly.

Visiting hours will be held Friday, October 14 from 7:00 until 9:00 pm at CALLAHAN FAY & CASWELL Funeral Home, 61 Myrtle Street. An additional visitation period will be held on Saturday, October 15 from 9:00 until 9:45 am at the First Baptist Church, 111 Park Avenue immediately followed by a Funeral Service at 10:00 am. Ogretta will be buried with her husband John H. Vaughn, Sr. at the Glendale Cemetery in Bloomfield, New Jersey (28 Hoover Avenue, 973-748-1253). The Interment Service will take place on Saturday, October 22 at 10:30 am.