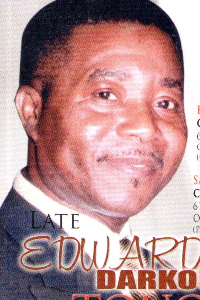 Edward was born in Koforidua, Ghana on May 6, 1950 the son of the late Kwasi and Alice Oppong. He worked as a supervisor at the former Montrose/CDT Distributors Co. Doing so, he will be remembered immensely for his hard work, dedication and diligence he put into the company. Edward was admired by many for his outstanding compassion of helping others, his engaging personality, contagious smile, and the significant influence he provided to others.

Visiting hours will be on Friday, October 7th from 6:00 until 9:00 pm at CALLAHAN FAY & CASWELL Funeral Home, 61 Myrtle St. Worcester, MA. His Funeral Service will be from 8:00 until 10:00 am on Saturday, October 8th at the funeral home. Burial will follow in Notre Dame Cemetery.