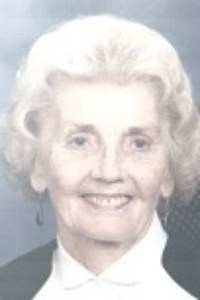 Sylvia Cecelia (Anderson) Nylund, age 91, died on June 12, 2016 at Country Meadows of Allentown, Pennsylvania. Born in Stockholm, Maine on March 2, 1925, she was the tenth of twelve children born to Carlton Harold and Christina Sophia (Swenson) Anderson. She was baptized in Madawaska Lake, Aroostook County, Maine.

Sylvia graduated from Caribou High School in 1942 at age 17 and moved to Worcester, Massachusetts where she worked as an administrative assistant at Norton Company. She married Lt. Arnold W. Nylund, a Navy blimp pilot in World War II. They were married at the Bethel Baptist church in Worcester, Massachusetts on July 8, 1944. She was a homemaker, devoted mother and a part-time typist for the Chemistry Department of Worcester Polytechnic Institute. They raised six children in Worcester and retired to Port Richey, Florida and Quinebaug, Connecticut. They celebrated 52 years of marriage before Arnold’s death in 1996.

Sylvia was a woman of faith and an active member of Belmont Street Baptist Church in Worcester where she sang in the choir and was a member of the “young adult” Sunday School class. She was a gifted musician who played piano and accordion by ear. She was the accompanist for the Finnish American chorus and her Sunday School class. She was a member of the Vasa Order of America Nordic Lodge #611. She enjoyed playing the accordion for Muhlenberg College’s St. Lucia Festival and performing in a Scandinavian folk dancing group.

Raised on a potato farm, Sylvia was a true farm girl who once picked 71 barrels of potatoes in a day. She made over 70 quilts, sewed and knit, gardened and canned fruits and vegetables, baked every week (her specialties were Swedish coffee buns and Swedish rye bread), and made home-made root beer and donuts.

A service of remembrance will be held at Nordgren Memorial Chapel, 300 Lincoln Street, Worcester, Massachusetts on Friday, June 24 at 1 p.m. followed by a reception at the former Belmont Street Baptist Church, now the Journey Community Church, 25 Belmont Street in Worcester. A calling hour will be held at the funeral home prior to the 1:00 service. Burial of the ashes at the All Faiths Cemetery in Worcester will be private.