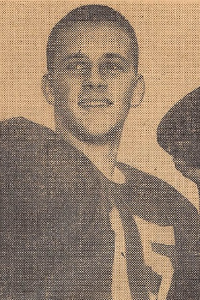 Philip J. O’Neil, Jr., 68, of Worcester, went home to be with the Lord on Saturday, June 11th in UMass Memorial Medical Center – University Campus. He leaves his devoted and loving wife of 43 years, Patricia E. (Terrio) O’Neil; two beloved sons Brendon J. O’Neil and Matthew P. O’Neil both of Worcester; a sister Karen O’Neil of South Yarmouth; and many nieces and nephews. He was pre-deceased by his brother John R. O’Neil.
Born in Worcester, the son of Philip J. O’Neil, Sr. and Anne (Chuplis) O’Neil, Philip was a graduate of St. Peter’s High School ’65, the College of the Holy Cross ’69 and received his Masters Degree in Education from Cambridge College.
A superb Saint Peter’s High School pitcher, first baseman and quarterback, he went on to star in both sports at the College of the Holy Cross. Some of his career highlights include; All-City selection in both baseball and football beginning in his sophomore year at St Peter’s, completing 36 career touchdown passes helping the Guardians reach a school record of 19-5, and receiving the Fran J. Corsac MVP Award at the Thanksgiving Day football game. Philip was later inducted into the St. Peter’s High School Hall of Fame in recognition of his exemplary athletic contributions to the school. When his own father was inducted in 1995, Philip and his dad were able to share in this very special moment as father and son.
While quarterback at the College of the Holy Cross, Philip ranked in the top 25 in the country in passing yards during the 1967 season - tops in New England, ending the season with 1,378 passing yards and ten touchdown passes, the most since the 1952 Crusader football season. An All American baseball player at the College resulted in him being drafted by the St. Louis Cardinals following both his junior and senior years. However, recognizing the importance and value of a college education, he elected to stay at Holy Cross and complete his bachelor’s degree in History. Throughout all of his sports accomplishments and recognition, perhaps his greatest occurred in 1999 when he was distinguished as one of the top fifty Central Massachusetts athletes of the century.
A life-long educator, Mr. O’Neil was a teacher in the Worcester Catholic School System for over forty years, teaching at the former Worcester Central Catholic Elementary School and Holy Name Central Catholic High School. He also taught driver’s education throughout the Worcester area for over thirty years. A football coach at both St. Peter’s and Holy Name, Coach O’Neil’s impact on student athletes is still being recognized today.
Philip was a member of St. Peter’s Parish and The College of the Holy Cross Alumni Association.
His funeral is Friday, June 17th with a Mass at 10:00 AM in St. Peter’s Church, 931 Main Street. (Please go directly to church). Burial will follow in St. John’s Cemetery. Calling hours are Thursday, June 16th from 4:00 until 8:00 PM in O’CONNOR BROTHERS FUNERAL HOME, 592 Park Avenue. In lieu of flowers, memorial contributions in Philip’s memory may be made to the Crusaders Athletic Fund at the College of the Holy Cross, Attention: Office of Advancement, 1 College Street, Worcester, MA 01610.