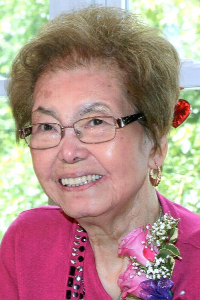 Yoshiko was born in Japan on July 27, 1925 a daughter of Tokutaro Akagawa. She immigrated to the United States in 1952 and became a U.S. citizen a year later. She and her children lived at Ft. Campbell, KY for 18 years. They moved to West Boylston in 1966 upon her husband’s retirement from the United States Army. She was a longtime resident of West Boylston. Yoshiko worked for over 20 years for the former Electro Fiber Optic as an assembler up to the age of 72. She enjoyed watching sports, crocheting, knitting, and cooking. She learned to cook delicious Italian from all her Italian Sister- in -laws. What brought her the most joy was watching her grandchildren grow up and attending the many sporting events they were involved in, especially football.

Yoshiko’s Funeral Mass will be held on Wednesday, June 15th at 10:30 am at Our Lady of Good Counsel Church, 111 Worcester St. A visiting hour will precede from 9:00 until 10 am at Fay Brothers Funeral Home, 1 West Boylston St. Burial will be in Mt. Vernon Cemetery.