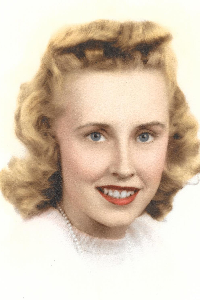 Sandwich: Hazel E. (Anderson) Johnson, 94 passed away peacefully on Friday, June 3, 2016 at Cape Heritage Nursing and Rehab Center. She leaves a son Dennis and his wife Brenda Johnson of Worcester, and her devoted daughter Donna and her husband Christian Metz of Harwich; two grandchildren Christopher Johnson and his wife Jennifer and her daughter Madeline of Northboro and Rebecca Bjornson and her husband Todd of Ashland, OR; three great-grandchildren- Benjamin, Nicholas and Isabella Johnson and their mother Dawn Philipps-Johnson of Hardwick. She also leaves a brother-in-law, sister-in-law and several nieces, nephews, and cousins. She was predeceased by her beloved husband of 47 years, Alfred E. Johnson who died in 1990, her cherished son David in 1964, and two brothers- Richard A. Anderson and David R. Burman.

Hazel was born in Worcester, daughter of the late Herman and Esther (Shoblom) Anderson. She graduated from Commerce High School and worked for many happy years at the Crown Bakery. She was a member of Greendale Peoples Church. Hazel's great love was taking care of her family and enjoying the company of her family and close circle of friends. She was always available for baby-sitting, hand-holding, and a fun day of shopping. During her husband's declining years she was the consummate care-giver, never complaining and always with a smile on her face. Her go to quote was "this too shall pass" and it stood by her during some heartbreaking times. She was without a doubt the best person we ever knew, kind and fearless.

Hazel's family would like to thank the staff at Cape Heritage Tupper Unit for their kindness and care given to Hazel and also to the staff of Hospice of Mass for their care and support.

Calling hours will be held on Wednesday, June 8, 2016 from 5-8 p.m. in Nordgren Funeral Home 300 Lincoln St. Worcester. A funeral service will be held on Thursday, June 9, 2016 at 10:30 a.m. at the funeral home. Burial will follow in All Faiths Cemetery. In lieu of flowers, donations in Hazel's memory may be made to either Cape Heritage Nursing and Rehab Center, Sandwich, MA (attn: Sunshine Fund) or to Hospice of Mass, 2527 Cranberry Highway, Wareham, MA 02571. For directions or to leave an online condolence message, please click guestbook link.