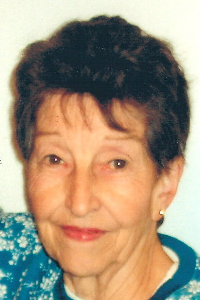 SPENCER: Therese D. (Houle) Johnson, 92, of School Street died Wednesday, June 1 in the Life Care Center of Auburn.
She leaves two sons; Arthur Poirier of Spencer and Raymond Poirier and his wife Sheila of Lennox, South Dakota, two brothers; Adrien Houle of Irasburg, Vermont and Donat Houle of Orleans, Vermont, a sister; Claire Roy of Spencer and several nieces and nephews. She was predeceased by her first husband Rosaire A. Poirier in 1973 and her second husband Elmer T. Johnson in 2008, a brother Roger Houle and a sister Cecile Robinson.
Mrs. Johnson was born in New Bedford, daughter of Ernest and Doria (Dudevoir) Houle. She work at Diene's Corp. in Spencer for 13 years retiring in 1986. She was a talented seamstress and at one time worked at Tony's cleaners as a sewer. During WW II she and her sister Cecile worked at Pratt & Whitney in Hartford, CT. She enjoyed sewing and yard work. She always kept herself busy around the house and she was also an excellent cook. She was a member of Mary Queen of the Rosary Church.
The funeral will be held Monday, June 6 from J. HENRI MORIN & SON FUNERAL HOME, 23 Maple Terr., Spencer with a Mass at 11:00 AM in Mary Queen of the Rosary Church, 7 Church Street, Spencer. Burial will follow in Worcester County Memorial Park, Paxton. A calling hour will precede the funeral from 9:30-10:30 AM in the funeral home.