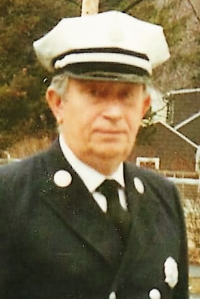 WORCESTER-Martin J. “Joe” O’Doherty, 88, passed away on Tuesday, May 31st at St. Vincent Hospital, after a brief illness. Joe leaves his loving wife of 48 years, Rose A. (Murphy) O’Doherty; four children, Dympna M. Thomas and her husband George of Falmouth, Stephen J. O’Doherty and his wife Ann Marie of Worcester and Anne E. Powers and her husband Sean of Lynnfield, RoseMary O'Doherty predeceased at a young age due to a biliary atresia; seven grandchildren, Colin, Anya and Kayla Thomas, Brendan, Sarah and John Powers and Bridget O’Doherty; his brother, Msgr. Jude O’Doherty of Miami, FL; his sister, Mary O’Doherty of Worcester and many nieces and nephews living here and in Ireland. He was predeceased by three brothers, Thomas, Garrett and Stephen O’Doherty and his sister, Betty Dalton.
Martin was born in Clohanes, Co. Clare, Ireland a son of Charles and Mary (Cahill) O’Doherty. He immigrated to the United States in 1949. Joe enlisted in the U.S. Army in 1950 and served proudly in the Korean War before being honorably discharged in 1952. He became a union plasterer and opened his own plastering business in 1974. Martin also joined the Worcester Fire Department and worked for 32 years, retiring as a Captain in 1992 from the Park Avenue Fire Station. He also served at Plantation St., Winslow St. and Downtown fire stations throughout his career.
Martin belonged to Our Lady of the Angels Church and the Alhambra Council #88 Knights of Columbus. He was an active member of the YMCA for over 50 years, an avid reader and golf enthusiast. Martin enjoyed spending time back home in Ireland and visiting his brother in Miami, Florida. Most of all, Martin loved his family, especially his seven grandchildren, who all thoroughly enjoyed his Irish charm and wit.
Visiting hours will be held on Friday, June 3rd from 5:00 until 8:00 pm at CALLAHAN FAY & CASWELL Funeral Home, 61 Myrtle St. His Funeral Mass will be held on Saturday, June 4th at 10:00 am at Our Lady of the Angels Church, 1222 Main St. His burial with military honors will follow in Worcester County Memorial Park, Paxton. In lieu of flowers, memorial donations may be made to Our Lady of the Angels Building Fund, 1222 Main St., Worcester, MA 01603.