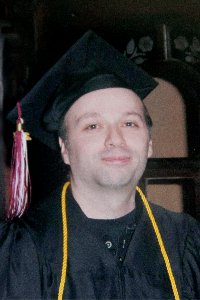 Worcester – Paul H. Vigneault Jr., 46, of Worcester, passed away peacefully in his home with his family by his side, on Sunday, May 29th after a courageous battle with ALS.

Paul is survived by his mother, Cecelia C. (Cote) Doros and her husband William of Shrewsbury; his father, Paul H. Vigneault Sr. of Worcester; aunts and uncles including, Grace and Louis Krueger of Worcester and Joseph and Myong Cote of Brookfield; a sister; 1 nephew Alex Forbes; 3 nieces Kaylea Flynn, Caitlyn Njuduna, and Faith Njuguna, a great niece, many loving cousins; and 2 special girls in his life who he cares for as if they were his own daughters, Alexandria Rothwell and Autumn Harvard.

Paul was born in Worcester, and graduated from Burncoat High School in 1988 and then proudly served in the United States Navy where he served 2 tours during Operation Desert Storm.

Mr. Vigneault graduated from Salter College in 2012 and was currently a receptionist for H & R Block and was also attending Assumption College to attain his bachelor's degree in accounting.

Paul enjoyed bowling, golfing, watching and collecting movies. He was considered to be an animal lover and has a special bond with his cat, Shadow.

The funeral will be held on Friday June 3rd from the Alfred Roy & Sons Funeral Home 12 Hammond St. with a Funeral Mass at 11 am in Our Lady of the Rosary Church 23 Fales St. Burial will follow in St John's Cemetery. Calling hours will be held on Thursday June 2nd from 5 pm to 8 pm in the funeral home. Memorial contributions in memory of Paul may be made to the MSPCA – Angell 350 South Huntington Ave. Boston, MA 02130.

His Mother and Bill wishes to Thank the many friends and family that spent time with Paul in his final months, also to Beacon Hospices and Epic for their loving care, The United Way for building his ramp, the firefighters for the labor of the ramp, Joe Carlson and Paul Soucey for making it happen, The VA in Jamaica Plain, West Roxbury and Ron with compassionate care for all their help.