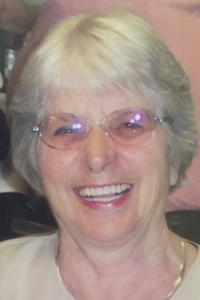 Loretta M. Millett, 83 of Cherry Valley, passed away peacefully on Friday, May 27th in the St. Francis Home surrounded by her family. Her husband of 55 years, William E. Millett, Sr., died in 2008. She leaves two daughters, Kathleen I. Drapeau of Palmer and Margaret M. Graham and her husband Kevin of Cherry Valley; two sons, John P. Millett and his wife Lori of Cherry Valley and William E. Millett, Jr. and his wife Cheryl of Spencer; two brothers, Albert G. Pinard of Oxford and Raymond W. Pinard of FL; three sisters, Alma M. Woods of FL, Blanche M. Bacon of TX, and Margaret M. LaRose of Worcester; ten grandchildren; ten great grandchildren; nephews and nieces. She was predeceased by a sister, Irene M. O'Brien.
She was born in Charlton, the daughter of Wilfred and Margaret (McLaughlin) Pinard and lived in Cherry Valley for many years. She was a former member of St. Joseph's Church and was a life member of the Cherry Valley American Legion Post 443 Auxiliary. She was an avid outdoorswoman, and especially enjoyed fishing, hunting, and camping with her husband and their beloved dog, Fred.
Loretta's family would like to extend their heartfelt thanks to the staff of the St. Francis Home for the exceptional care she received.
Calling hours are Thursday, June 2nd from 4:00 until 6:00 P.M. in O'CONNOR BROTHERS FUNERAL HOME, 592 Park Avenue. Her funeral service will follow at 6:00 P.M. in the funeral home. In lieu of flowers, contributions in her memory may be made to the St. Francis Home, 101 Plantation Street, Worcester, MA 01604.