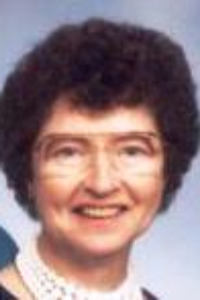 She leaves her son, Donald S. Hebb and his wife Stephanie Kissiday of Worcester; a daughter, Karen E. Berggren; 3 granddaughters; 7 great grandchildren; and many nieces and nephews. A son, Edward C. Hebb of Worcester, died November 25, 2001. Five brothers and eight sisters also predeceased her. She was born December 22, 1928 in Bridgewater, Nova Scotia, daughter of the late G. Wallace and Clara A. E. (Veinotte) Faulkenham and lived in Worcester most of her life. She graduated from Commerce High School in Worcester and was a long time member of Greendale People’s Church. She had been a member of the church choir, Proto 5, and served as a Girl Scout Leader.

Myrtle was a senior clerk at Memorial Hospital where she worked for 20 years until retiring in 1985. She previously worked for Avon Cosmetics. Before that, she worked as a clerk at the former John C. MacInnes Department Store. She enjoyed bowling, camping, gardening and singing in the church choir.

There are no calling hours. Private services will be held at the convenience of the family. Burial will be in Worcester County Memorial Park, Paxton, MA. The family suggests donations in Myrtle’s memory be made to the Edward C. Hebb - Selah Endowment Fund, c/o Greendale People's Church, 25 Francis St., Worcester, MA 01606. Kelly Funeral Home, 154 Lincoln St., is assisting the family. To share your thoughts and memories with the family on-line, please visit www.kellyfuneralhome.com