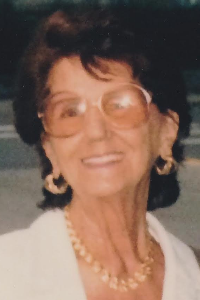 Webster
Georgette (Xifaras) Nicholopoulos, 89, passed away Monday, May 16, 2016 at St. Vincent Hospital in Worcester.
Her husband, Epamonantae ‘Nonda’ Nicholopoulos died in 1974 she was also predeceased by a daughter, Koula ‘Carol’ Nicholopoulos who died in 1992.
She leaves behind 2 daughters; Leah DiDonato of Webster and Athena ‘Nina’ Nicholopoulos and her husband Ira A. Cohen of New York City, 2 grandchildren; Sunday Comeau amd her husband John and Nicolas DiDonato and his wife Karla, 3 great grandchildren; John and Athena Comeau and Hudson DiDonato, 2 brothers; Robert Xifaras of New Bedford and Steve Xifaras of Attleboro, 1 sister; Jenny Konstantakos of New Bedford as well as several nieces and nephews.
Georgette was born in New Bedford a daughter of the late Louis and Stella (Gerekaris) Xifaras and lived in Webster most of her life.
She worked as a waitress for many years at the Castle Restaurant in Leicester and the Driftwood in Shrewsbury before retiring.
Georgette was a member of Sts. Constantine and Helen Greek Orthodox Church and the Philoptochos Society of the church and was also a member and past president of the Daughters of Penelope. She enjoyed her summers in New York City and going to Broadway Shows and Lincoln Center, she also wintered in Florida for many years, and she especially loved to dance and listen to music and later play bingo.
Georgette’s Funeral Service will be Monday, May 23, 2016 at 10 AM at Sts. Constantine and Helen Greek Orthodox Church, 35 Lake Parkway, burial will follow in Mt. Zion Cemetery.
Calling Hours will be Sunday, May 22,2016 from 4-6PM (In the Church), a Trisagion Service will be at 5PM.
Flowers may be sent or Memorial Contributions may be made to: Sts. Constantine& Helen Greek Orthodox Church, P.O. Box713, Webster, MA .01570
The ROBERT J.MILLER FUNERAL HOME and LAKE CHAPEL, 366 School St. ,Webster is assisting Georgette’s family with arrangements.
On Line Guest Book, or to Share a Memory of Georgette, please visit: RJMillerfunerals.net