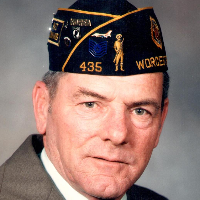 Richard was born in Worcester a son of George and Mary (Kersius) Castle and graduated from Worcester Boy’s Trade School. He proudly served in the United States Navy during the Korean War. After an honorable discharge from the Navy, Richard also served in the Air National Guard. He worked for over 35 years for the Commonwealth of Massachusetts plowing in the winters and serving as an administrator, retiring in 2000. Richard was a member of the Vernon Hill American Legion Post #435 and served as a Past Commander. He loved to work around his home with his daughter, gardening and spending time with his family and friends.

Richard’s funeral service will be held on Friday, May 13th at 10:00 am at Emmanuel Lutheran Church, 200 Greenwood St. Burial with Military Honors will follow in Worcester County Memorial Park, Paxton. There are no visiting hours. In lieu of flowers, memorial contributions may be made to Emmanuel Lutheran Church, 200 Greenwood St., Worcester, MA 01607. Arrangements are in the care of LINDQUIST LUNDIN Funeral Home, 36 Butler St.