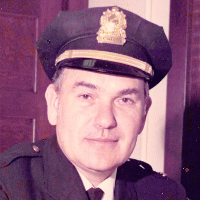 John L. Hackett, 90, passed away peacefully on Friday, May 6th, 2016. He was the youngest son of the late William and Catherine (Shaughnessy) Hackett. He leaves behind his loving wife of 65 years, Helena (Moore) and his children and their spouses, John and Louise Hackett of Mansfield, Anne Hackett and her husband, Thomas Devlin of Douglas, Kevin and Debra Hackett of Cumberland, RI, Brian and Deborah Hackett of Paxton and Mary and Paul Zamarro of Worcester. He also leaves his sister, Catherine (Hackett) Hammond of Worcester as well as 12 grandchildren, 6 great grandchildren and numerous cousins, nieces and nephews. He was predeceased by his siblings and their spouses, William and Nancy (Crowley) Hackett, Marie (Hackett) and John Callahan, Rita (Hackett) and Joseph Gagnon, Alfred Laverty, Paul and Blanche (Cowee) Hackett and Eileen (Hackett) and James O’Connell.

John graduated from St. Peter’s High School in Worcester where he co-captained the football team and was class president. He enlisted in the United States Navy and was a World War II veteran. Following the war, he attended Catholic University before returning to Worcester and joining the Worcester Police Department. John served for 42 years and rose to rank of Lieutenant, retiring in 1990. He liked to reminisce about his early days as a beat cop on Shrewsbury Street. He also worked in the Motor Patrol and later headed up the Police Service Aid program. He ended his career as head of the Liquor Squad and worked closely with the city’s Licensing Commission. He was an active member of the Worcester Police Relief and took pride in helping out his fellow officers and families.

John was a devoted Catholic and was a founding member of St. Andrew the Apostle Parish where he served as a Lector and Eucharistic Minister. He was a member of the St. Andrew’s Men’s Club and the Knights of Columbus. More than anything else, John was a loving family man. He was devoted to his wife, Helena and his children and their families. He enjoyed vacationing with his family at the beaches of Cape Cod and Maine. He was kind, gentle and fair. He was a great husband, father, brother, catholic and police officer. He will be fondly remembered and sadly missed.

The family would like to give thanks to all the good people at the Christopher House who helped care for John over the last two years.

His funeral is Wednesday, May 11th from O’CONNOR BROTHERS FUNERAL HOME, 592 Park Avenue with a Mass at 10:00 AM in St. Andrew the Apostle Church, 5 Spaulding Street. Burial will follow in St. John’s Cemetery. Calling hours are Tuesday, May 10th from 4:00 until 7:00 PM in the funeral home. In lieu of flowers memorial contributions may be made to the Worcester Police Relief Association, 9-11 Lincoln Square, Worcester, MA 01608 or the St. Andrew the Apostle Church, 929 Main Street, Worcester, MA 01610.