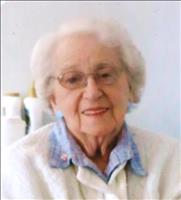 She leaves her daughter, Nancy E. Carlson and her husband David of Sutton, two grandchildren, Karen and Stephen Carlson,two great grandchildren, Cameron Hicks of Worcester and Zachary Carlson of Warren, a sister, Gurlie Anderson of Worcester, and several nephews and nieces. Three brothers; Carl Raymond, Herbert and Alvin Anderson and a brother-in-law, Frank Anderson predeceased her.


She was born in Worcester, daughter of Axel G. Anderson and Anny E. Backman and graduated from Charlton High school. Marion was a lifelong member of Emanuel Lutheran Church.


A Funeral Service will be held at 11:00 AM on Tuesday, May 3rd at Charlton City United Methodist Church, 74 Stafford Street, Charlton. A visiting hour will also be held at church on Tuesday from 10:00 AM until the time of the service. Burial will be private.

In lieu of flowers, donations may be made to the Charlton City United Methodist Church.


Arrangements are under the care of LINDQUIST LUNDIN Funeral Home, 36 Butler Street, Worcester.