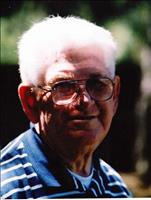 LARAMIE, WY - Anthony J. ‘Tony” Chlapowski, 88, of Laramie, died Sunday, April 3, 2016 at Ivinson Memorial Hospital. He was born, March 24, 1928 in Dudley and raised in Webster, Massachusetts, the 2nd of seven children.
He worked as Superintendent and Guidance Director in the Charlton, MA school system until his retirement in 1980. He was a WWII veteran who serviced in the 82nd airborne stationed in Italy. Tony moved to Laramie in 1981 to complete his Phd in Education. He began a second career at Wal-Mart as a door greeter which he continued for 25 years. Tony the greeter enjoyed his Wal-Mart family and especially giving stickers to the children. Tony was a member of the Lions Club in Laramie and a Past Exulted Ruler in the Auburn, MA. Elks Club. He enjoyed traveling and took many yearly trips around the country and visited Europe for his 80th birthday. He was an avid sports fan. He followed all his New England teams and had a special passion for his Patriots. Tony was an active member of St. Paul’s Newman Center church community since his arrival in Laramie.
He is survived by his loving wife, Esther (nee Thompson) Chlapowski of Laramie; his brother, John; his sisters, Eleanor and Patricia as well as six children, Samuel Chlapowski of Georgia, Catherine Bugbee of Laramie, James Chlapowski of Germany, Victoria Carlson of Connecticut, Luke Chlapowski of Colorado, and Elizabeth Chlapowski of Colorado. Tony had a special love for his eleven grandchildren and two great grandchildren who brought him much joy. Anthony was a familiar face in the community. His kindness and smile will be missed by all that knew and loved him.
Vigil services were held April 6, 2016 at St. Paul’s Newman Center. Funeral Liturgy was Thursday, April 7, 2016 at St. Paul’s Newman Center.
Graveside services with military honors will be held on Thursday, April 14, at 11:00 A.M. in Saint Joseph Garden of Peace Cemetery, 50 Old Worcester Road, Webster, Massachusetts. Donations in his name may be made to Saint Ann's Monastery and Shrine Basilica c/o Father Joe Jones, 1233 Saint Ann St, Scranton PA 18504, Phone (570)-347-5691. Local arrangements are under the direction of Sitkowski & Malboeuf Funeral Home, 340 School Street, Webster, Massachusetts. To send condolences or to sign the online guestbook go to www.montgomerystryker.com