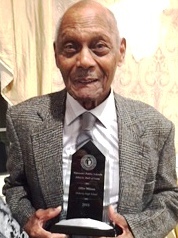 He was born and raised in Worcester, son of the late Leslie M. and Lena (Jackson) Wilson and lived here all his life. He was a Veteran of both World War II and the Korean War having served in the Army, Navy and the United States Marines Corps.

Oliver worked at Heald Machine for 24 for years until retiring in 1988. He previously worked at the Bancroft Hotel for 14 years. He was also known as a professional boxer in the Worcester area and was a member of the Worcester Boxing Association. He was a life long sports enthusiast and loved watching sporting events, especially football. He will be remembered for his exceptional singing voice and his devotion and loyalty to his family and friends.

CALLING HOURS will be from 9 A.M. to 11 A.M. on WEDNESDAY, APRIL 13 in KELLY FUNERAL HOME, 154 Lincoln St., followed by a FUNERAL SERVICE at 11 A.M. in the funeral home. Burial will follow in Worcester County Memorial Park, Paxton, MA.

The family suggests donations in memory of Oliver be made to Covenant United Methodist Church, 24 Hamilton, St., Worcester, MA 01604. To share your thoughts and memories with the family on-line, please visit www.kellyfuneralhome.com