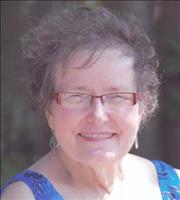 WEBSTER – M. Lois (Markiewicz) Bazinet, 67, died Monday, April 4, 2016 in the Life Care Center of Auburn after an illness.
She leaves her husband of 45 years, Gregory P. Bazinet; 2 sons, Nathan W. Bazinet and his wife Stacy of Medfield and Martin G. Bazinet and his wife Amanda of Worcester; a beloved grandson, Edmond Bazinet; many nieces and nephews.
She was born in Webster on October 1, 1948, the only child of Walter P. “Wes” and Jeanne F. (Hajec) Markiewicz. She graduated from Bartlett High School in 1966 and earned her Bachelor of Science in Nursing Degree from the University of Mass. at Amherst in 1970. She then was awarded a Masters in Nursing Staff Development from Boston University in 1980. She lived in West Germany for 1 year and in Portland, ME for 40 years, returning to Webster in 2010.
A registered nurse, Mrs. Bazinet worked in the critical care unit at Mass. General Hospital in Boston. She then was employed at the Maine Medical Center in Portland for 37 years, retiring as a nursing staff development specialist in 2008.
She loved living at Webster Lake. She also enjoyed traveling to Europe with her family. She liked horseback riding and boating. A lifelong Beatles music fan, she and her future husband Gregory attended their first U.S. concert in Boston in 1965. She served as a trained volunteer in the Boy Scouts of America in Portland, Maine. The family wishes to thank a dear friend Frank S. P. Yacino, as well as Lois’s companion Paula, for their loving support.
The funeral will be held Friday, April 8, from the Sitkowski & Malboeuf Funeral Home, 340 School Street, with a Mass at 10:00 AM in Saint Louis Church, 14 Lake Street. Burial will be in Saint Joseph Garden of Peace. Visitation will be from 6:00 to 8:00 PM Thursday, April 7, in the funeral home. Donations in her name may be made to American Parkinson’s Disease Association, Mass. Chapter, 72 E. Concord St., Room C-3, Boston, MA 02118.