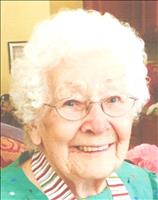 SPENCER: Pamela L. (Girouard) Collette, 96, formerly of 5 Casey St., beloved wife, mother, grandmother and great grandmother, passed away on Monday, March 7 at Life Care Center of Auburn.
Her husband of 62 years, Normand "Bus" Collette died in 2005. She leaves her son Robert Collette and his wife Diane, grandson Randall Collette and his wife Katherine, their daughters Emma and Elizabeth all from Falmouth, Ma., grandson Ross Collette and his wife Sara of Ft. Lauderdale, Fl., several nieces and a nephew. She is predeceased by her brother Robert Girouard and sister Dorothy Bozyk and her husband Walter. She will be deeply missed by her family, relatives and friends.
Born in Spencer, she was the daughter of John and Alice (Parker) Girouard. She was a lifelong resident where she met and married her late husband.
Pam worked at the former Kleven's Shoe Co. and also as a cashier at the former Gaudette's Supermarket. She cooked meals for the Sisters of the Assumption in their convent next to the old St. Mary's School and served as the area representative/distributor fro the Tupperware Co., hosting many Tupperware parties. She was very active in several organizations including the Improved Order of Redmen where she rose to the level of Great Pocahontas of Massachusetts. During her tenure, and on behalf of the Native Americans of Mass., she delivered a welcome address to the Pilgrims reenacting the Mayflower voyage from England to Plymouth. Pam attended daily Mass and devoted time and energy to her Church. She was a parishioner at St. Mary's Church, Eucharistic Minister, Past President of its Women's Guild and member of its St. Anne's Sodality. A very accomplished seamstress, quilt maker, with her work being displayed in many venues, and enjoyed sewing, knitting, tatting and crochet.
She found great joy in cooking for anyone who entered her home. Pam traveled with "Bus" to reunions with the 14th. Air Force Flying Tigers in China and annual meetings in the U.S, counting many of the "Flying Tigers" among her friends.She was an enthusiastic card and bingo player, joining in many games each week in Spencer and surrounding towns.
Her funeral Mass will be held on Thursday, March 10 at 11a.m. in Our Lady of he Rosary Church, 7 Church St., Spencer. Burial will follow in Mary, Queen of the Rosary Cemetery, Spencer. Calling hours will precede the services on Thursday in the J.HENRI MORIN & SON FUNERAL HOME, 23 Maple Terr., Spencer from 9:15 to 10:45 a.m.In lieu of flowers, contributions may be made to Mary, Queen of the Rosary Parish, 60 Maple St., Spencer, Ma. 01562.