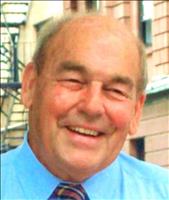 WEST BOYLSTON-Paul D. McGuiggan, Sr. died on January 18, 2016 - just a few days shy of his 79th birthday - after a long and valiant battle with metastatic prostate cancer. He was surrounded by his loving family at Rose Monahan Hospice in Worcester.

Paul was the son of the late Charles and Mary (Scully) McGuiggan of West Boylston and the son-in-law of the late Henry and Anna (Tata) DePatsy of West Boylston. He is survived by his devoted wife of 57 years, Carol A. (DePatsy) McGuiggan and their five children: Aletha of Shrewsbury, Paul Jr. of South Carolina, Steven and his wife Rene of South Carolina, Brian of Long Island, NY, and Hon. Janet J. McGuiggan and her partner Ann McCarron of Worcester. Paul also leaves several cherished grandchildren. He is also survived by his two sisters and two brothers: June Buthray and her husband Anthony of MA and FL, Carol Lotane of NH, Wayne of NC and William of ME. And, he is survived by his sister and brother-in-law: Eileen and Charles Strong of West Boylston. Paul also leaves several loved nieces and nephews.

Paul graduated from the Police Academy and served as a police officer in West Boylston for many years. Paul also held positions in W.B. on the Water Department and as a Water District Commissioner, having earned the Commonwealth of Massachusetts Board of Certification of Operators of Drinking Water Supply Facilities. Paul retired from Wyman-Gordon Co. in Worcester where he was exceedingly proud of his hard work as a well-respected foreman in the Forge Department. During his retirement years, Paul worked as a driver for Wagner Motors in Boylston and Shrewsbury.

Paul was an avid golfer and was a member at Wachusett Country Club for many years where he enjoyed competing in the annual Four-Ball Tournament. He also coached his sons Little League baseball teams. He was a longtime member of the VFW, the West Boylston Historical Society, and Our Lady of Good Counsel Church.

Paul enjoyed home and family time, cookouts and grilling, ice fishing, and a long car ride to any scenic destination. Paul and Carol vacationed in South Carolina to visit their sons and their families and in upstate NY for a boat ride through the Thousand Islands or a leisurely fishing trip with dear friends, the Feickerts. He loved the beaches of Cape Cod and the shoreline of Maine. When visiting the Depatsy’s in Maine, Paul embraced the Maine lifestyle by raking blueberries, caring for the horses and readying them for the track races, spending a day out on the ocean pulling lobster traps, and attending the Union Fair. He enjoyed the simple pleasures of sun on his face while relaxing on his deck, watching birds on his bird feeders, and the beauty of a cloudless sky – often remarking “you can’t buy a cloud today!” He had fun watching his daughter Janet playing in the West Boylston Women’s Softball League and was her team’s #1 fan. He also loved a challenging game of Scrabble. Paul was proud to be Irish and proud to be a Marine. He was tough as nails and was known for his strong handshake. He loved to laugh and had a great sense of humor. Simply stated – Paul loved life and fought hard to hold onto it.

The ashes of Paul’s adoring and beloved pet foxhound, Holly, will be buried with him per his request.

His family wishes to thank the staff at Rose Monahan Hospice for their care, and also Doctors Richard Palken, Michael Gusar, and Robert Franger, and their staff, for their care and friendship over many years.