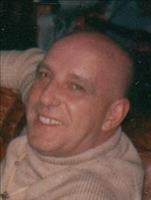 DUDLEY – Marshall J. Russell, 87, died Friday, January 8, 2016 in Sandalwood Center, Oxford after a period of declining health. His wife, Anne B. (Dalterio) Russell, died in 2014.
He leaves a daughter, Lila A. Russell and her husband Randall of West Union, West Virginia; and many nephews and nieces who fondly remember the many Sundays spent at Uncle Marshall’s home.
He was born and raised in Oxford, son of Harry and Lila (Rondeau ) Russell. He lived in Webster for 5 years before moving to Dudley in 1961. He graduated from Oxford High School.
He was a World War II Army veteran.
Mr. Russell was a lineman for Mass. Electric and then worked for many years at Johnston Steel & Wire in Worcester, retiring as a foreman in 1982.
He enjoyed spending the winter in Claremont, FL with his wife for many years.
A graveside service will be held at 10:00 AM Tuesday, January 12, in Saint Roch’s Cemetery, Federal Hill Road, Oxford. Visitation will be from 9:00 to 9:30 AM Tuesday in Scanlon Funeral Service, 38 East Main Street, Webster.