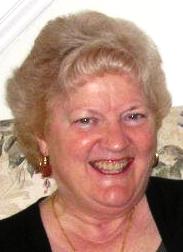 Maureen leaves behind her two sons, Kenny Janulewicz and his wife Amanda of Worcester and Joseph Janulewicz and his wife Stephanie of Chesapeake, VA; four grandchildren, Tegan, Caden, Maddox and Liam; her former husband and friend, Teddy Janulewicz, Jr.; two brothers, Michael P. O’Grady and Kevin F. O’Grady both of Worcester and her sister, Bernadette Winberg of Millbury; nieces and nephews. She also leaves some great friends including, Kelly Ritchie, Mary Purcell and the entire Riley family. Her sister, Ann Marie Smiddy predeceased her.

Maureen was born in Worcester the daughter of Michael J. and Mary T. (Gallivan) O’Grady. She graduated from Ascension High School and St. Vincent Hospital School of Nursing. She worked for many years for the Visiting Nurses’ Association and UMass Memorial Healthcare before retiring. Maureen loved to vacation in Maine, spend time with her family and friends and spoiling her four grandchildren. Nothing brought a bigger smile to her face than when her grandchildren were with her. Maureen always found time to stop and get her Dunkin Donuts Coffee before going off to visit with friends. She was always the life of the party wherever she was and was always the last to leave.

The family would like to thank the staff especially the nurses at Brigham & Women’s Hospital in Boston for the excellent care given to Maureen during her stay there.