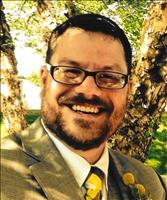 
Michael F. Goesch, 43, passed away on Wednesday, January 6, 2016 in the Bay State Medical Center in Springfield surrounded by his loving family following a brief illness. His last act was to save lives as an organ donor. He leaves his fiance Rachael Pride and her children, Eli and Olivia; his father William H. Goesch of Worcester; a sister and brother-in-law Kristina and Chris Berardi of Billerica; a niece Eva Berardi and many family and friends whose lives he enriched. His mother Sadie (Hirschfeld) Goesch predeceased him in 2014.
Michael was born in Worcester, graduated from Doherty Memorial High School, earned a bachelors degree from WPI class of 1996, and earned his Masters Degree from Notre Dame College, where he became a Physicians Assistant. Michael saved many lives as an EMT and a Physicians Assistant in multiple emergency settings. He spent the last six years serving the veterans at the VA Medical Center in White River Juction, VT. Michael also worked with Homeland Security on the MMRS Medical Task Force keeping people safe during events and wilderness rescue operations. He became exceptional in wilderness emergency medicine and even instructed many courses.
When not acting as a hero Michael enjoyed spending time with his family and his dogs having many outdoor adventures such as; hiking, snow shoeing, cross country skiing, camping or relaxing on the water. Michael also loved to watch all the New England sports teams.
Calling hours will be held on Saturday, January 16, 2016 from 10 a.m. until 12 noon in Nordgren Funeral Home 300 Lincoln St. Worcester, MA 01605. A memorial service will follow at noon in the funeral home. A celebration of life will occur on February 20th, 2016 at his home in Northfield, MA. In lieu of flowers, donations in Michael's memory may be made to the DAV or to the ASPCA . For directions or to leave an online condolence message, please click link below.