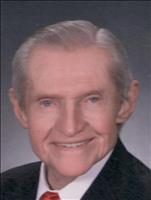 He is predeceased by his wife, Joan Marie (Whealan) Flynn whom he married February 23, 1957 in New Jersey.
Mr. Flynn was born in Fitchburg, October 12, 1926, son of John J. Flynn and Celia McDonnell Flynn.

He is also predeceased by his brother, James E. Flynn and sister, Maureen Flynn May.

He graduated St. Bernard’s High School, Fitchburg, MA in 1943 where he was the captain of the football team. Attended Cushing Academy in 1944 where he was captain of the football team.
He was a World War II Veteran who served in the 7th Infantry Division in the Pacific in 1945 where he was promoted to 1st Sgt. at the age of 18 while serving in Okinowa. He also served in Korea. In 1965, he retired from the Massachusetts National Guard as a major in the 181st Infantry Division.

He served on the Fitchburg Police Department for 10 years, during which time he was promoted to detective. In 1963, he became Deputy Master of the Worcester County Jail and House of Correction. In 1986, he was elected High Sheriff of Worcester County, a position which he held for 3 terms over the next 18 years.
In the year 2000, he was elected to the Electoral College. He was also Chairman of the West Boylston Democratic Committee for 15 years.

He was a member of St. Joseph’s Church in Charlton.

We would like to thank our father, who was so dedicated to his family, friends, and community. Dad was the patriarch of our family and was happily involved in his children and grandchildren’s lives until the day he died. Dad’s compassion for his fellow man was legend. He treated everyone with dignity and respect. Despite his busy political life, he was a rock for his friends and family and would drop everything to help someone who needed him. He lit up a room with his presence and he will be deeply missed everyday of our lives.

Visiting Hours will be held on Tuesday, January 12th from 3:00 pm until 7:00 pm at CALLAHAN- FAY AND CASWELL FUNERAL HOME, 61 Myrtle St., Worcester. A Funeral Mass will be celebrated on Wednesday, January 13th at 10:00 am at St. Joseph’s Church, 10H Putnam Rd., Ext., Charlton. Burial with Military Honors will follow at Westridge Cemetery, Charlton. In lieu of flowers donations may be made to Mercy Center, 25 W. Chester St., Worcester, MA 01606