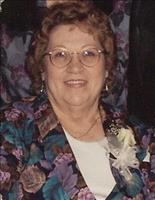 CHARLTON: Geraldine A. (Shackett) Lamothe 77 of City Depot Rd., died Sunday, Dec. 13 at Southbridge Rehab & Health Care Center.
She was the wife of Robert D. Lamothe, Sr. who died in 1991. She leaves two sons Robert D. Lamothe, Jr. and Roy J. Lamothe both of Charlton, a daughter Joyce A. Jensen and her husband Joseph of Leicester, a sister Ruth Lavoie and her husband Raymond of Calif, 5 grandchildren, and 2 great granddaughters, nieces and nephews. She is predeceased by a son Bruce J. Lamothe of Charlton in 1991.
Born in Milford, she was the daughter of Leslie and Ara (Berthume) Shackett. She was a longtime shoe worker at the former Brookfield Athletic Shoe Co, in E.Brookfield, retiring in 1970. She was a member of St. Joseph's Parish.
Friends and family can attend a graveside service in Worcester County Memorial Park, Paxton at 11 a.m. on Wednesday, Dec. 16. Calling hours are private. In lieu of flowers, contributions may be made to American Liver Foundation, 188 Needham St.- Suite 240, Newton, Ma. 02464. J.HENRI MORIN & SON FUNERAL HOME, 23 Maple Terr., Spencer is assisting the family with arrangements.