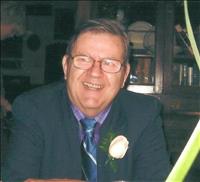 LEICESTER: Raymond F. Soucie, 76, of 32 Second Street in the Cherry Valley section of Leicester. "A true gentleman and our Ray of sunshine" passed away peacefully in the comfort of his home on Wednesday, Dec. 9 surrounded by his family.
His beloved wife and best friend Takeko (Fujimaki) Soucie passed away on Dec. 1, 2008. As a loving father he leaves eight daughters; Theresa Soucie of Fairhaven, Tammy Burke and her husband Michael of Fitchburg, Kristina Cournoyer and her husband Dennis of Dudley, Karen Gentile and her husband Anthony of East Brookfield, Doris Howard and her husband William of East Brookfield, Louise Earle and her husband Denison of Cherry Valley, Bet Lloyd of East Brookfield and Terry Lloyd Hurley and her husband Glenn with whom he lived, and the best grandfather ever to 21 grandchildren and 13 great-grandchildren. He also leaves a brother Francis Soucie and was pre-deceased by a brother Norman Soucie. AUF-wiedersehen Ginney.
Ray was born at home in Lewiston, Maine son of, Francis and Ferdenend (LaFlamme) Soucie. He served his country in the United States Navy. He was a machinist for many years, first at Heald Machine and later retiring from Dienes Corp. in 2001. The best words to describe Ray are by the many titles given to him throughout his beautiful, generous, and courageous life and are as follows; Ray-san, our hero, dad, pop, poppy-doodle, grampy, papa, Godfather, big guy, the tire man, CEO of Fujimaki, Co., computer wizard, cribbage king, family accountant, shooter of squirrels, Patriots fan, Red Sox junkie, rumpledoodle and our come back king. A friend to all, his courage, strength, and bravery has always been and always will be an inspiration to all of us.

In honor of Ray's request and family devotion his celebration of life was at his home privately from his diagnosis on July 27 until his passing on Dec. 9. "Everybody loves Raymond and you are just a whisper away." There are no calling hours. In lieu of flowers memorial donations may be made to VNA Care Network and Hospice, 120 Thomas Street, Worcester, MA 01608. MORIN FUNERAL HOME, 1131 Main Street, Leicester is directing arrangements.