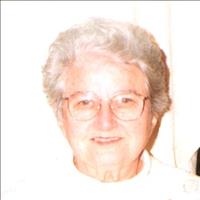 She was born on January 31, 1925 in Worcester, the daughter of Edward D. and Margaret J. (Buckley) Murphy. Ellen was predeceased by her daughter Kathleen M. Scavone who died in 2015, her three brothers, Daniel T. Murphy, Edward F. (Francis) Murphy, and Jeremiah J. (Joe) Murphy and her three sisters, Mary E. Jones, Therese M. Roix and Julie R. Gay. Ellen was a graduate of the former Ascension High School and a proud graduate of St. Vincent Hospital School of Nursing. She worked for many years as a private duty nurse at the hospital and also cared for numerous patients in their homes.

She was a long time parishioner of St. Stephen’s Church. She was a member of the Diocesan Council of Catholic Nurses, St. Vincent Hospital School of Nursing Alumni Association and St. Stephens Woman’s Club for many years .Ellen loved her children, grandchildren, her church, St. Vincent’s Hospital and summers at Hampton Beach.

The family would like to extend a sincere thank you to the staff of Notre Dame in the Harmony Wing for their kindness and to Sister Kay Burns of the Sisters of Notre Dame who spent countless days visiting with Ellen.

A visiting hour will be held Tuesday, November 24 from 8:30 to 9:30AM at CALLAHAN~FAY~CASWELL Funeral Home, 61 Myrtle Street followed by a Funeral Mass at 10AM in Saint Stephen’s Church, 357 Grafton Street. Burial will be in Saint John’s Cemetery. In lieu of flowers, donations may be made to the Restoration Fund of St. Stephen’s Church, 16 Hamilton St., Worcester, 01604 or to the St. John’s Food for the Poor, 44 Temple St., Worcester, 01604.