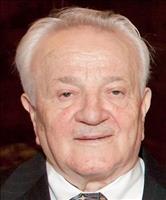 Thomas M. Tsetsos, 88, of Worcester, died Saturday, October 31st with his loving family by his side. He is survived by his wife of 60 years, Katerini (Tsiatis) Tsetsos; his son, James T. Tsetsos and his wife, Ann-Marie; two daughters, Chrysoula Pappas and her husband, Nicholas and Helen Eliadis and her husband, Arthur all of Worcester. He leaves behind four grandchildren, Arthur Pappas, Thomas Pappas and his wife, Paige, Theodore Eliadis and Katrina Eliadis; and several nephews and nieces. Mr. Tsetsos was predeceased by seven brothers.
He was born in Glina, Vorios, Epiros, Greece, the son of Michael and Chrysoula (Chellios) Tsetsos. He came to Worcester in 1955. Mr. Tsetsos had been employed as a baker by Table Talk Pie Company. He was a member of St. Spyridon Greek Orthodox Cathedral and a past member of the Order of AHEPA. Mr. Tsetsos was an avid card player, and loved cooking, watching sports and above all spending time at home with his family. He will be deeply missed..
His funeral is Thursday, November 5th from O'CONNOR BROTHERS FUNERAL HOME, 592 Park Avenue, with a service at 10:00 a.m. in St. Spyridon Greek Orthodox Cathedral, 102 Russell Street. Burial will follow in Hope Cemetery. Calling hours are Wednesday, November 4th from 6:00 until 8:00 p.m. in the funeral home. In lieu of flowers please make memorial contributions to the St. Spyridon Greek Orthodox Cathedral Family Center.