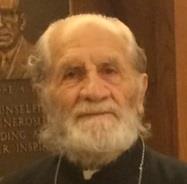 Fr. Emmanuel J. Sakellarides, 84, of Worcester, died Saturday, October 24th in UMass-Memorial Hospital with his loving family at his side. His wife of 40 years, Presvetera Kalliope (Katogiritis) Sakellarides died in 1998. He leaves two sons, John E. and Nicholas E. Sakellarides; his daughter, Nina Karamboulas-Sakellarides and her husband, Ilias and their children, Kalliopi E. and Evangelia Karamboulas, all of Worcester; three brothers, Vasili, Mihali and his wife, Evdoxia and Stamati and his wife, Sophia Sakellarides, all of Piraeus, Greece and many nephews and nieces in Greece. A brother Nicholas Sakellarides and a sister Irene Horatazis predeceased him.
He was born of the Island of Karpathos, Greece the son of John and Evangelia (Spanos) Sakellarides. He was a graduate of the Ecclesiastical School of Patmos, and later the University of Athens Theological School. While in Greece he was appointed Chantor at St. Anargyroi in Kallipolis, Pireaus, Greece. In 1960 Fr. Sakellarides came to New York and had worked as a Chantor and Greek School teacher at the Three Hierarchs Church in Brooklyn. On September 9th, 1962 Father was ordained a deacon, and later ordained a Priest,at the Transfiguration of Christ Church in Corona, NY on September 14th, 1962. Upon his retirement he had been active as a Chantor and taking part in religious services at St. Spyridon Greek Orthodox Cathedral. Father Emmanuel enjoyed walking with his sons, being out doors and tending to his garden. His greatest joy was the time he spent with his granddaughters.
A Liturgy Service will begin at 9:00 a.m. Friday, October 30th, followed by his funeral service at 10:30 a.m. in St. Spyridon Greek Orthodox Cathedral, 102 Russell Street. Burial will follow in Hope Cemetery. Calling hours are Thursday, October 29th from 5:00 until 8:00 p.m. in the Cathedral. In lieu of flowers please make donations to St. Spyridon GOYA or St. Spyridon Greek Orthodox Cathedral Family Center, both c/o St. Spyridon Greek Orthodox Cathedral. O'CONNOR BROTHERS FUNERAL HOME, 592 Park Avenue is assisting the family with arrangements.