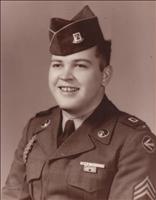 DOUGLAS – Gerald Bachand, 85, of Douglas, died Thursday, October 22, 2015 in the Saint Francis Home in Worcester.
He leaves his beloved wife of 60 years, Judith (LeBoeuf) Bachand; nephews and nieces; great-nephews and great-neices and great-great-nephews and great-great-nieces. He was preceded in death by his sister, Rose Gadbois, and by his 2 brothers, Frank Bachand, Jr. and Bernard Bachand.
He was born Dudley, a son of Frank and Isabel (Sorel) Bachand, Sr.
Mr. Bachand worked as a side laster at Webster Shoe Company and then at B & W Footwear both of Webster, retiring in 1985.
He was a communicant of Sacred Heart of Jesus Church in Webster.
Mr. Bachand served his country in the Korean War as a Tank Sargent with the 64th Tank Battalion, Able Company. In his line of service he was injured and received the Purple Heart. He was also a recipient of 3 Bronze Stars, the Korean Service Medal, the United Nations Service Medal, the National Defense Service Medal and 2 Overseas Bars. He was a member of the Webster-Dudley Veterans Council.
The family would like to thank the staff of the Saint Francis home for their compassionate care of Jerry.
The funeral will be held on Monday, October 26, from Scanlon Funeral Service, 38 East Main St., Webster, with a Mass at 11:00 AM in Sacred Heart of Jesus Church, 16 East Main St., Webster. Burial with full military honors will follow at Sacred Heart Cemetery in Webster. A calling period will be from 9:00 A.M. to 10:15 A.M. on Monday October, 26 in the funeral home. Memorial donations in his name may be made to the Wounded Warrior Project, PO BOX 758517, Topeka, KS 66675.