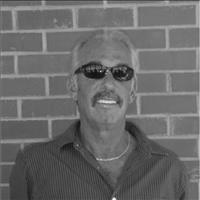 Scott Richard Lawry, 61, passed away August 25, 2015 at his little home, “The Ranch”, in Ventura. He was diagnosed with stage 4 pancreatic cancer on August 1st, and though his battle was short, it was fought with strength of character and mind until coming to a very peaceful end. He took his last breaths right after his wedding song, “Forever & Ever, Amen” and went out in style to Grand Funk’s “I’m your Captain”. He was surrounded by family and friends, so very loved, and holding the hands of his girls Deb & Dallas.
Scott was born on October 10, 1953 in Santa Rosa California, to George and Charlotte Lawry. He was raised with 2 younger brothers and an older sister in Santa Rosa. He was very active with the Oak Park Otters Swim Team in the 1960s and later,he participated in sports for Montgomery High School. In the early 70’s, Scott moved to Long Beach where he attended Long Beach State. Scott quickly realized that his career would center on sales. He loved the outdoors and particularly loved spending time at the family’s summer home on Lake Almanor, where he enjoyed barbecuing, fishing and boating.
Scott met his bride Debbie, (nicked named “The Mouse” – he had nicknames for everyone!) in 1986. The two were planning to celebrate their 25th wedding anniversary on Sept 1st, barely 7 days after his passing. Scott and Deb became the proud parents of their only daughter in May of 1992, little Dallas Rose. While Scott came across as a big scary Dad which often served as boy repellant, it was obvious to all that Dallas was his true legacy. She was his princess as well as the “son he never had,” taking up hunting as a little girl, and later continuing on with his love of collector guns, target shooting, boating, and fishing. “Dinky” was and still is daddy’s girl, and she will carry on his big heart and humor for the rest of us. But Deb was his life companion, and never was there a stronger or truer bond of “through sickness and health.” She was his rock, and he was her Harley-Davidson Riding hunk of a Sinatra Singer. Scott’s high school friends would later tease Deb, “how was she the one to land the
‘legend’ “ ! He and Debbie poured all of their love and support into raising their Dallas, and the pride Scott had in his wife and daughter was shown in so many ways. Sitting through years of music and dance recitals, through timing for every swim meet, screaming for number 11 at every water polo game, and holding the hands of his two loving oncology nurses in his final moments.
In spite of childhood polio and a horrific car accident in 1969, Scott led a productive career of 30+ years in sales and marketing – touching the sporting, landscaping, radio, and RV industries. Those that knew Scott would often say “he could sell ice in Iceland,” and for more than 30 years he did! Scott also had a love for 1970’s music, listening to Grand Funk Railroad and Chicago: a smile on his face and air guitar or horn in hand, even just a few days before passing. One of Scott’s claims to fame was his rendition of Frank Sinatra’s “New York”. On one occasion (his wedding reception) he had a stage of screaming women pawing at his feet as he masterfully duplicated the actions and voice of the legendary star. Another one of Scott’s loves was westerns. He could repeat nearly all of the lines from almost any western. However, his all-time favorite character was Augustus McCray in Lonesome Dove. He often displayed that small head nod and mustache twist that actor Robert Duvall perfected in the legendary movie. With his knives, leathers and guns we often thought that Scott was born in the wrong century. But, not so . . . he had a love of certain “finer” modern creations especially his stylish Mercedes and his pearly white Harley Davidson Sportster.
Scott was preceded in death by his parents, George (2012) and Charlotte (2010), and Sister Nancy (1990). Left to cherish the memories of his life and love are his wife Debbie and daughter Dallas. Left to remember, smile and cuss, are brothers Sam (Gwen) of Montana, Steve (Mary) of Ventura, and many in-laws, nieces, nephews, and close friends who adored him.
The fast and hard life that Scotty lived in his younger years was only out matched by the extreme love and dedication with which he lived once he became a family man. He will be missed by all that knew him - for his wisdom, his movie quotes, his laughs, and his big sensitive heart. For those of us left living, be inspired by his physical and mental strength during his final days. He was a fun and fine husband, father, brother and friend! And so, here we are . . . the final screen shots . . . he would end the movie of his life with, “It’s been one hell of a party! So let it be written, so let it be done.” God Bless.
Arrangements are under the care of the JOSEPH P. REARDON FUNERAL HOME & CREMATION SERVICE, 757 East Main Street, Ventura. A Celebration of Life will take place at the Mission San Buenaventura, 211 East Main Street, Ventura, CA, on Saturday, October 10th (Scott’s birthday), 2015 at 10:00 am. After services, the celebration will continue at “The Ranch”.