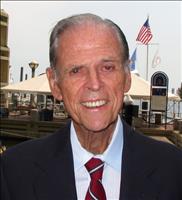 SPENCE, William J. "Bill", Visionary, Activist and Entrepreneur of Hingham, Hyannis Port and Bal Harbour, Florida, left this world on May 10, 2015 at the age of 85. His life was devoted to service, both to family and community. He was a visionary and had the courage to stand up for what he believed was right and made the world a better place because of it. He served in the United States Navy as an officer during the Korean War and was an elected member of the Massachusetts House of Representatives, serving constituents on the South Shore of Boston from 1969-1975. One of his proudest achievements was sponsoring legislation that raised the minimum wage in Massachusetts twice during his years of service.

He was instrumental in changing the music scene in Boston in the 1960’s, bringing both local bands and up and coming major rock n’ roll musicians to the Surf Ballroom, his club on the South Shore of Boston. He had the foresight to book the Rolling Stones for their first US tour and ran the first major integrated concert in the South at a time when segregation was still the norm. He did this knowing he would “lose his shirt” because most of the parents, black and white alike, would not allow their children to attend the concert. He was right on the financial end but proud of his choice to go forward.

He was also ahead of his time in the field of public transportation, operating the first commuter boat from the South Shore to Boston and “fought tirelessly over the years to keep ferries alive on the waterfront”. He was the President of Massachusetts Bay Lines, the ferryboat company he founded, for over 50 years. He was the former President of Interferry, an international association of ferryboat operators from around the world. He also served as a long time Director of the Rockland Trust Company, a local, community oriented bank in Massachusetts, started by his grandfather.

He grew up in Rockland, MA and attended the Fessenden School, Phillips Exeter Academy and was a graduate of both Harvard College and Harvard Business School. He was a member of Resurrection Parish in Hingham for over 50 years and taught confirmation classes to teens there. He was also a member of the Knights of Columbus, a Catholic fraternal organization devoted to helping those in need and to the principals of charity, unity and fraternity. He was married to Wilma Collins Spence for 62 years and raised a family with her on the South Shore of Boston. Wilma was engaged as a partner with him on many of his business ventures and affectionately known to him all these years as “Precious”. They shared a love of family, dogs, golf, warm weather and humor. Cape Cod and Florida were special places they shared together. They were members together of the Hyannis Port Club in Massachusetts and The Surf Club, Indian Creek and La Gorce Country Clubs in Miami. Bill was a devoted husband, father and grandfather and was proud to have lived a life that embodied the philosophy given to him at a young age by his father: “You are not one bit better than anyone else nor one bit worse. People may be smarter or stronger or wealthier than others, but in the eyes of God, all people are equal.” It was his hope to be remembered as a considerate husband, father and friend to all.

He leaves behind his beloved wife of 62 years, Wilma Collins Spence, four children, Jay Spence and his wife Bonnie Baldwin of Pembroke, MA, Darcie Spence of Mill Valley, CA, Jeffrey Spence and his wife Mary Brigid Ratelle of Charlotte, NC, Kerry Spence and her husband Robert Fitzgerald of Needham, MA, his brother John Spence of Duxbury, MA, his brother-in-law John Collins of Wellesley Hills, MA, his sister-in-law Barbara Spence of Scituate, MA, 11 grandchildren, many nieces and nephews and many friends, neighbors and colleagues. He was predeceased by his parents Grace and Frederick Spence of Rockland, MA and his brother Robert Spence of Scituate, MA.

Funeral from George F. Doherty & Sons Funeral Home, 477 Washington Street (Rte 16), Wellesley, MA, Monday June 1st at 10:00 AM, followed by a Funeral Mass at Saint Paul’s Church in Wellesley at 11:00 AM. Visiting hours on Sunday May 31, 2015 from 1-5 PM at George F Doherty & Sons Funeral Home. The internment will be private. For directions and on-line guest book please see www.gfdoherty.com.