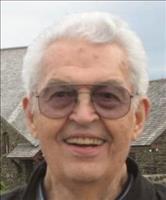 Glendon Herbert McAlister, 88, died Sunday evening, March 23, at his home at The Goddard House in Worcester, Mass., with family by his side.

Glen was born in Bethel, Maine, on October 23, 1925, the only child of Milo Elbert and Marjorie Mae McAlister. He attended Gould Academy. At 17, he trained at Harvard University as an naval officer, and served in the Pacific arena during WWII. After the war, he earned a B.A. from Bates College and a Master's in Education at Bridgewater State College in Massachusetts.

Glen's career as an educator spanned forty years. He designed innovative curriculums and instructional materials for specific populations of students including academically challenged and academically talented, prisoners aspiring to earn high-school and college diplomas, and college students training as educators. He served as a training director for Job Corps and a consultant to McGraw-Hill under the Office of Economic Opportunity.

Friends are welcome at a memorial service and luncheon to be held at The Goddard House, 1199 Main Street (Route 9), Worcester, Mass. at 11am on Sunday, March 30. Flowers may be sent directly to the Goddard House; donations can be made in his memory to any public library. Arrangements are through O'Connor Bros. Funeral Home, 592 Park Ave., Worcester.