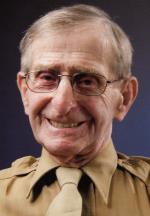 Raymond A. Noury, 90, of Pascoag, formerly of Woonsocket, died Friday at the Providence Veterans Administration Medical Center. He was the husband of Therese (Deshaie) Noury and the late Francoise E. (Daigle) Noury.
Born in Central Falls, he was a son of the late Joseph and Marie-Jeanne (Noury) Noury. He was raised in Central Falls and graduated from Sacred Heart High School in Central Falls.
Mr. Noury served in the U. S. Army Air Corps during WWII. Initially serving on the Atlantic coast on patrol for U-boats he later transferred to become a crew member of the B-24 Liberator bombers. His unit saw service in North Africa and then went to England to fly missions targeting German military and industrial targets. Mr. Noury saw action during 17 missions over Nazi-occupied Europe and was the sole surviving member of his plane when it was shot down over the Czech Republic on February 22, 1944. He was taken prisoner and remained in a German POW Camp until the end of the war.
For his service to his country Mr. Noury was awarded the Purple Heart, Silver Star, Distinguished Flying Cross, European African Middle-Eastern Theatre Campaign Ribbon, Distinguished Unit Badge, Good Conduct Medal, American Theater Campaign Ribbon and American Defense Service Medal.
During his working career Mr. Noury was employed at Kayeem Meats Inc., H. P. Hood Inc. and was the owner and proprietor of the former Chapel Four Corners Market in Cumberland. Later in life Ray went on to earn his college degree from Roger Williams University.
Ray maintained a lifelong concern for his fellow veterans through his membership and involvement in the American Legion Alphonse Yelle Post 9 in Manville, the Central Falls VFW, and the Disabled American Veterans and though his supports of numerous veterans charities. He was also a member of the Cercle Laurier, Le Club Par-X, and the Italian Workingmen’s Club in Woonsocket. His hobbies included golfing and bowling.
Ray will be remembered as a loving husband and father and cherished his role as a grandfather and great-grandfather.
In addition to his wife he is survived by three sons Paul Noury (Pauline) of Seekonk, MA, Michael Noury (Robin) of Ashaway, and Robert Noury (Pam) of Pawtucket, three daughters Rachel Noury of Bristol, Denise Arrighi (Paul) of Pawtucket, Cheryl Noury of Warren and a step-daughter Denise Ethier (David) of Pascoag. He was the brother of Ernest Noury of Central Falls, Claire Pierce of Woonsocket and the late Rene Noury. He is also survived by 19 grandchildren, many great-grandchildren and many nieces and nephews. He was the grandfather of the late Raymond J. Noury who passed away in 2011.
His funeral will be Friday at 8:45 am from the Menard-Lacouture Funeral Home, 127 Carrington Ave. Woonsocket followed by a Mass of Christian Burial at 10:00 am in St. James Church, Division St. Manville. Burial with Military Honors will follow in St. James Cemetery, Manville. Visiting hours are Thursday from 3-7 p.m.
www.menardfuneralhome.com