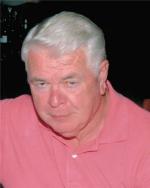 DON MARSHALL, 78 of Chester, NH - Walter D. Marshall, 78. Of Chester, NH died Saturday January 5, 2013 at Beth Israel Deaconess Hospital, Boston, MA surrounded by his loving family. He was born on October 30, 1934 in Somerville, MA, a son of the late Walter and Eleanor (Coffin) Marshall. He was raised in Somerville, where he graduated Somerville High School. Don was a resident of Andover, MA for 36 years before moving to Chester, NH 11 years ago. He enjoyed the outdoors and hunting. Mr. Marshall loved spending time with his grandchildren.
He is survived by his wife of 46 years, Rita (Hagan) Marshall of Chester, one son, Keith Marshall and his wife Kimber of Chester, one daughter, Donna Lucinskas and her husband John of Windham, four beloved grandchildren, Nathan Marshall, Emily Lucinskas, Riley Lucinskas, and Jack Lucinskas, one sister, Dolores Hoegfeldt and her husband Jon of Minnetonka, MN, brothers-in-law, James F. Hagan and Thomas Hagan and his wife Jean, as well as many nieces and nephews.
There are no calling hours. Following cremation, a funeral Mass will be celebrated at 10:00 am on Saturday January 12, 2013 at St. Thomas Aquinas Church, 26 Crystal Ave., Derry. The Peabody Funeral Homes and Crematorium, 15 Birch St., Derry is assisting the family with arrangements.