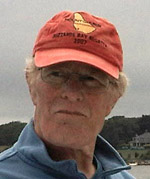 John C. Bentley, Jr., 64, died peacefully at his home in Dartmouth on December 9, 2012. He had battled prostate cancer for 16 years. While he was prone to hyperbole in his storytelling, it is no exaggeration to say that he will be missed enormously by all who knew him.
John was born in Hackensack, N.J. on January 4, 1948, to John C. Bentley and Eliza Taft Bentley. After attending the Pingry School in Elizabeth, NJ, he was graduated from Tufts University with a B.A. in Philosophy and subsequently earned JD and LLM degrees from Suffolk University and Boston University. In 1971, he married Dorothy "DeeDee" Waldinger, and, after a few years in the Boston area, they settled in Dartmouth where they raised their family. John became a partner at the law firm of Braudy, Bentley, and Feingold and later opened his own firm, Bentley & Associates.

An avid competitor throughout his life, John was co-captain of the 1970 Tufts lacrosse team and later continued playing with the Boston Lacrosse Club. In his lifelong passion for sailing, he successfully competed in every decade of his life. He was at home on Nantucket Sound and Buzzards Bay, whether in a Beetle Cat, Wianno Senior, 3/4 Ton, J/80, or Etchells, He raced the 14 foot Laser for 25 years and competed off the shores of five different continents. Among his many sailing honors were winning the overall championship at the 1979 Edgartown Race Week, the SMYRA Family Racing Trophy in 1983 & 1984, and the 1995 Small Trophy, earning a spot in the U.S. Singlehanded Championships. He was the Laser Grand Master Champion at 2004 Chesapeake Bay Regatta and helped steer Rusty Kellogg’s Blue Magic to a 2nd place overall finish in the 1991 Marion-Bermuda race. He also received the George B. Knowles, Jr. trophy from the New Bedford Yacht Club in 2002 for sailing excellence and achievement in the previous year.
In addition to competing, John was also an enthusiastic organizer of sailing events. He helped to bring the 1985 3/4 Ton North Americans and the 1990 Laser Master World Championships to Padanaram. He also ran numerous smaller events and served on the Singlehanded Championship Committee for US Sailing and ran the Area A Championship for 15 years.

John served on the Boards of the New Bedford Yacht Club, WHALE, the Dartmouth Natural Resources Trust and the Childrens’ Museum of Dartmouth. He also was instrumental in preserving the Zeiterion Theater.

Beyond his work and his great involvement in his sailing events, John tried never to miss one of his children's activities. He and DeeDee thought nothing of driving 3 hours in each direction in a day to watch an hour-long game, since it meant being there to support their child. He was even known to have tried coaching ice hockey, despite his uncharacteristically un-athletic skating ability.
He is survived by wife DeeDee; son Jeb and his wife Maija (Milwaukee, WI); daughter Eliza and her husband Andrew Epstein (Los Angeles, CA); son Peter and his fiance Ryan Gallacher (Los Angeles, CA); sister Tina Bentley Lehman and her family (Lexington, MA); and brother-in-law Andres Roomet and his family (Hinesburg, VT). His sister, Louise Bentley Roomet, predeceased him in 2009. He was a dedicated and loving grandfather to four grandchildren .

He leaves behind cousins, nieces, nephews and many close friends from all periods of his life, from childhood on Aberdeen Rd. in Elizabeth, NJ, to local clients for whom he worked tirelessly, to his fellow competitors in the international Laser community. He lived his life with passion, competitive zeal, relentless humor and personal integrity. He entertained all those who he encountered and he will be missed.

In lieu of flowers, donations in John’s name may be made to the Prostate Cancer Foundation, 1250 Fourth Street, Santa Monica, CA 90401 or on-line www.pcf.org. We are grateful for the research being done.