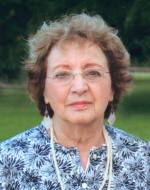 Mary was the youngest girl in a family of 7 with 4 sisters, all strong minded women, and two brothers. A Honeymoon in Bermuda in 1952 marked the beginning of a 60 year marriage and was the spark that began a lifelong love of travel and a fascination with other cultures and peoples of the world.

The devoted wife of John DeMelim, Professor Emeritus of Art at Rhode Island College. Loving mother of John DeMelim and his wife Pam and their two children John and Emma; David DeMelim and his wife Jeanne and their children Jillian, Samatha and Alison. Mary was an accomplished artist in her own right, being active in the Art Jewelry movement in the early 60's, working with renowned jeweler Joseph Showenfelt. She was also an accomplished Weaver, having shown at the Providence Art Club as an invited artist and whose work is in several private collections. She was active early on in the Handicraft Club and many other local organizations involved in promoting the arts.

Mary entered the business world in 1968 and quickly excelled, expanding the reach of the organization and earning the respect of both board members and staff. She was Executive Director of the Institute of Management Sciences, an international non-profit organization comprised of academics and business executives dedicated to the sharing and publication of research and information related to the science of Business Managment and Opperational systems. She remains the only non-scientist to be awarded that organization's Distinguished Service Award

She was responsible for overseeing the daily operation of the business office, managing the publication and distribution of several scientific journals providing a platform for academics to have their research published. Additionally she was responsible for planning and running the organization's national and international meetings. This part of her job gave Mary and John the opportunity to spend much of the subsequent 40 plus years traveling the world.

Their travels have taken them to many of the world’s top tourist attractions, but their real interest was in the places less traveled, from a canoe trip up the Sepik River in New Guinea to a camel trip to a desert oasis along the old Silk Road. Traveling for them, was seeing and experiencing the place as the locals did, from a stay in an eastern style hotel in Japan in 1975 to a camping trip across Mali, in West Africa by Land Rover.

Her skill as hostess and love of cooking, inspired by her exposure to foods from all over the world, her consummate ability to assemble a feast from the randomness of ingredients will be sorely missed. She will be remembered as a loving wife, a caring and dedicated mother and widely acclaimed as the best mother-In-law anyone could have.

Her funeral will be held Friday at 8:30am from the Anderson-Winfield Funeral Home, Route 44 at Greenville Common, Greenville. Mass of Chrisitan Burial at 9:30am in St. Philip Church, 622 Putnam Avenue, Greenville. Burial in the RI Veteran’s Cemetery, Exeter. Visitation Thursday 4-7pm. In lieu of flowers donations in her memory may be made to the Shinn Foundation. Checks should be made payable to RIC Foundation, 600 Mount Pleasant., Providence, RI 02908 or http://my.ric.edu/support.php They will earmark all donations made in Mary DeMelim's memory to the Shinn Foundation for study abroad. http://www.ric.edu/studyabroad/shinn.php